As South Korea's annual summer heatwave approaches, not even the coolest of the nation's celebrated K-pop stars are immune to soaring temperatures.

Kim Tae-hyung - better known as V, a member of popular South Korean boy band BTS - impressed fans with his honesty when he revealed he was experiencing cholinergic urticaria, a previously little-known medical term for heat rashes. The allergic reaction occurs when body heat and sweat form hives, which can last hours and in some cases even days.

Responding to a fan comment on BTS Weverse, the group's official global fan platform, about why he had been seen "tickling" himself, the singer said: "I have a cholinergic allergy, [it's so] itchy."

Soon afterwards, "cholinergic urticaria" became a top-trending term on South Korean search engine Naver, as well as across Twitter and other social media.

I'm glad Tae opened up about having Cholinergic Urticaria. I for one is someone with a skin condition (psoriasis) that I struggle with daily and am very self conscious about. This may be a reason why he may not want to show his abs, especially it that is an area that +@BTS_twt pic.twitter.com/9mH6dW5jgQ

Despite the upcoming summer heat - which saw temperatures hit a record 41 degrees Celsius last August, the hottest the nation has been in the past 111 years - the bestselling K-pop group is slated to perform in Seoul next month.

V's admission drew a deluge of empathy from fans, with many commenting that they had experienced heat rashes themselves, if not other skin conditions - and that it must be difficult for an idol with such an active lifestyle. 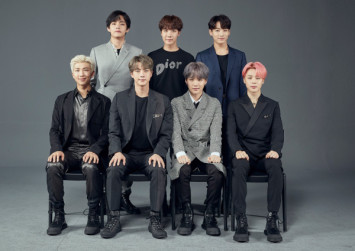 However, BTS is also taking heat for announcing an October performance in Saudi Arabia. The group on Monday confirmed they would be playing a show at King Fahd Stadium in the capital of Riyadh as part of their "Love Yourself: Speak Yourself" tour in October this year.

Critics and fans have expressed their concerns over the band's decision to perform in the conservative Middle Eastern nation, where under the rulership of crown prince Mohammad Bin Salman Al Saud, women can only make legal decisions with male permission through Saudi Arabia's "guardianship system"; are not allowed to dress in ways that show off their beauty; and cannot participate in regular activities such as public swimming.

Same-sex activity is also illegal in Saudi Arabia, a nation considered to have one of the world's worst records for LGBT rights.

To many, BTS' decision seemed to fly in the face of the celebrated speech given by BTS leader Kim Nam-jun, better known as RM, at the United Nations General Assembly last September. "No matter who you are, where you're from, your skin colour, your gender identity - just speak yourself," he said at the time. "Find your name and find your voice by speaking yourself."

Said @HoriyaOsman in a tweeted response: "Artists have been boycotting Saudi Arabia due to flagrant human rights abuses against women activists and the LGBTQ+ community. BTS are UN representatives and everyone involved here should have known better, honestly speaking Bighit [the group's management company] should have known better."

In the speech, RM also urged the audience to love themselves, part of the welcoming approach to LGBT issues for which BTS has previously been feted.

"I love BTS but this is not right. I feel for the fans but by performing in a country where women and LGBTQ are segregated is just awful, Saudi Arabia will profit from the festival," @anissalyn27 tweeted about the event.

"Nicki Minaj took a stand and BTS should too," they wrote, referring to the American hip-hop star's decision to cancel a show in Saudi Arabia after stating her support for women and LGBT rights in the strictly governed Gulf nation.

BTS and the group's management firm have yet to comment on the issue.