BTS at the 2021 American Music Awards in Los Angeles, on Nov 21. The K-pop group will need to quarantine on their return to South Korea and will likely miss out on appearing at major K-pop award show MAMA.

BTS will return to South Korea next week after four sold-out concert dates in California – and, because of new travel restrictions because of the Omicron variant, head straight into self-quarantine.

According to South Korean news agency Yonhap, the K-pop septet is set to return from the US after completing their Permission to Dance on Stage concert series and appearing in the popular iHeartRadio Jingle Ball tour on Dec 3.

South Korea has announced it will place all overseas arrivals that arrive on or after Dec 3 in a 10-day quarantine, which means BTS will be expected to go into isolation when they make their return. This restriction is expected to be in place for two weeks.

Earlier this year, the group were sworn in as presidential envoys and given diplomatic passports before appearing at the United Nations in New York.

They have travelled frequently between South Korea and the United States since then. However, the latest Covid-19 developments have made travel more complicated.

BTS were expected to attend the Mnet Asian Music Awards (MAMAs) on Dec 11, but if they are in quarantine they will be unable to go. 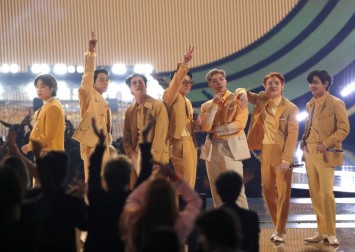 Last year, BTS won eight awards at the awards show, including all four of the event’s grand prize awards: Song of the year, artist of the year, album of the year and worldwide icon of the year.

Neither the group nor their company, Big Hit Music, have confirmed a travel and quarantine schedule.

And although MAMA organisers had not confirmed their attendance ahead of the new quarantine regulations, it had been assumed BTS would attend, as they are considered front runners for multiple awards this year.

The new quarantine rules appear to confirm that BTS will not attend this year’s event. MAMA organisers did not respond to the Post ’s request for confirmation of this.

The 2021 MAMAs are set to feature a variety of artists, both K-pop acts and those from other genres.