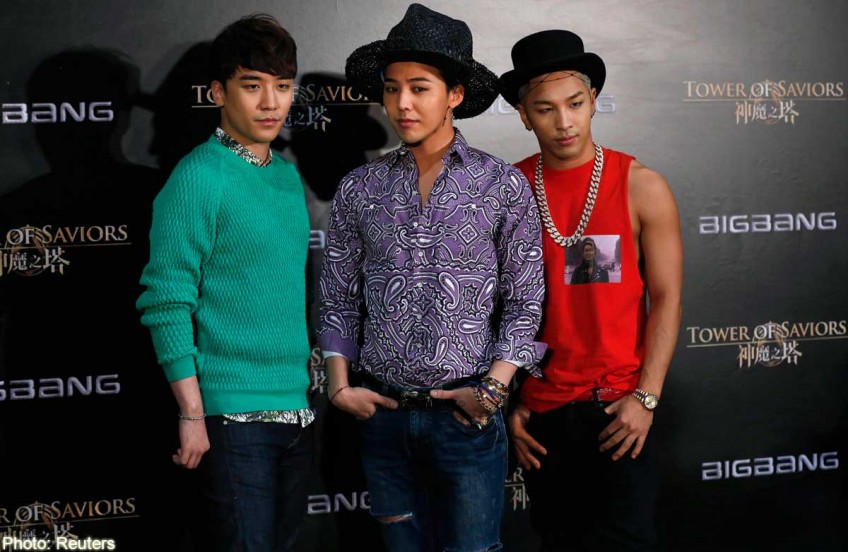 Ms Sky Tey, 28, and her friends queued outside The Float @ Marina Bay from Boxing Day till yesterday.

Their reason? To watch their favourite K-pop group, BigBang, perform up close.

The boy band were among the acts that performed during the Celebrate SG50 countdown at The Float @ Marina Bay last night.

Local talent such as The Sam Willows, Stefanie Sun, Shigga Shay and The Dim Sum Dollies were some of the other acts.

Tickets were sold out, with some 25,000 people attending.

When The New Paper arrived on Tuesday, seven tents had been set up neatly in a line outside the carpark. Some fans laid out waterproof mats on the ground, while others sat in a group outside their tents.

Ms Tey and her friends were the first in line. The Malaysian had travelled from Malacca with her friends to watch BigBang.

To prevent people from queue-jumping, Ms Tey's group created a name list for the fans to know who came first.

One fan is allowed to queue for a maximum of 10 people and each has to take his turn in the queue.

Indeed, Ms Tey said the rule was an unspoken agreement among fans in Singapore.

She added: "The name list and taking turns to queue are unspoken rules among the fans when it comes to queuing overnight.

"Besides, I don't think anyone would dare jump the queue.

"Normally, those who do so would get scolded by other fans."

No one queues for an entire week for such events. Instead, fans usually take turns to queue for each other, Ms Tey said. The longest she has stayed in a queue was two nights.

Another fan, Malaysian Sui Mei Yee, said they usually shower in the toilets of the shopping malls nearby.

Her group was the fourth in line.

Just ahead of them in the queue was a group of fans from Singapore, who had been queuing since last Friday.

Jessie Wong, 17, and three friends, were on queue duties for the group on Tuesday. One of the friends, who wanted to be known only as Faye, told their parents that they would be queuing overnight to watch BigBang.

The fans were also prepared for the wet weather, arming themselves with items like umbrellas and ponchos.

Said Ms Tey: "We knew that it would rain, so we came prepared. We even brought a blanket in case it gets cold at night."

This article was first published on January 1, 2015.
Get The New Paper for more stories.