Celebrate Arthur's day with The Fray 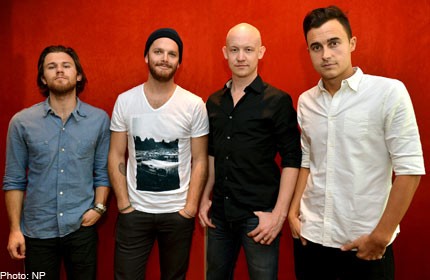 I was briefly bewildered but mostly amused when The Fray's Ben Wysocki revealed his boldest act to date.

In fact, I laughed out loud.

I wasn't being rude, I promise.

The drummer of the US rock band had just admitted to peeing on stage during a gig - and it wasn't even due to a bad case of nerves.

Wysocki, 28, had not suffered from stage fright but instead had needed to flee to the nearest loo urgently.

He told LOUD over the phone from Florida where he is currently on vacation: "We were only halfway through the show and I really had to go. Nobody really looks at the drummer and I was wearing black jeans anyway. The guys had no idea, they only knew about it after."

Here's hoping the cheeky drummer won't do the same when he performs with vocalist/pianist Isaac Slade, guitarist/vocalist Joe King and guitarist Dave Welsh at the Guinness Arthur's Day concert here on Sept 27.

Promising "a bold night out", the event is the highlight of the Arthur's Day celebrations in Singapore at a venue to be revealed later.

Only 1,759 people will be among the privileged to enjoy drinks and great music.

To win exclusive tickets, you have to prove how bold you are.

The Arthur's Day celebrations were first organised in 2009 to mark the 250th anniversary of the signing of the lease of the Guinness Brewery in Dublin, Ireland, by Arthur Guinness.

Wysocki admitted that he was not familiar with Arthur's Day but said that won't stop The Fray from putting up a good show.

The event couldn't be more fitting for the Guinness stout lovers, whose favourite alcoholic drink is a concoction of three parts of stout and one part champagne, something they discovered when they opened for Irish rock band U2 a few years ago.

"Before the first show, we were in our dressing room and were sent a cooler with a note that read 'Welcome to the show'. There was Guinness and champagne with another note (on how to mix the drinks). I'm not sucking up but that was really a yummy beverage..." Wysocki said.

In the last few months, The Fray have been busy putting the finishing touches to their fourth album.

Fans who are expecting an album full of tracks reminiscent of their major hit How To Save A Life, however, will be sorely disappointed.

This is how Wysocki described their new sound: A cross between French electronic duo Daft Punk, US rock band Spoon, US alternative dance and electronica outfit LCD Soundsystem and US pop singer Katy Perry.

He added: "It's like mixing everybody together, they produce a baby and that baby sounds like The Fray."

It's safe to say that it will be The Fray like you've never heard them before, and for that they have their Grammy-winning British producer Stuart Price - who's worked with American pop singers Lady Gaga and Madonna - to thank.

Perhaps it's also a much-needed breath of fresh air for the band, who have remained successful with their tried-and-tested formula of churning out one "familiar, thought-provoking, sad, sappy" hit after another.

So it was time to shake things up.

"We took ourselves too seriously. So we let our hair down and (revealed) a side that's light-hearted and that translates directly into our music," said Wysocki.

"We had the most fun making this album as compared to the past... We make it a goal to take risks. The dangerous thing is getting comfortable when you make art and we have been guilty of that. It's time to pull ourselves out of our comfort zone and pull our fans out of it as well."