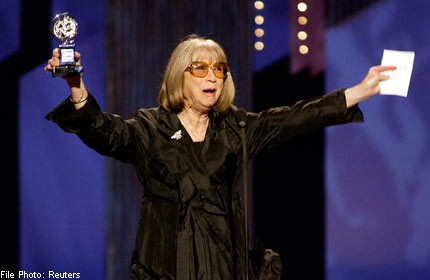 UNITED STATES - Julie Harris, the diminutive actress who won five Tony Awards for her stage performances and was also honoured for her work in television and film, died on Saturday at age 87, a Massachusetts funeral home said.

Bill Collins, a funeral director at the Nickerson Funeral Home in Chatham, Massachusetts, confirmed the death of Harris, who lived in nearby West Chatham.

Aside from her widely acclaimed theatre work, Harris was known to television audiences in the 1980s for her role in the prime-time soap opera "Knots Landing," in which she played a country music singer and the mother of another key character.

Harris was also nominated for an Oscar and appeared in more than 30 films, including "East of Eden" in 1955, in which she played James Dean's love interest.

She was born in Grosse Pointe, Michigan. Her father was an investment banker and her mother a nurse.

Harris attended the Yale School of Drama for one year before leaving in 1945 to begin acting on Broadway.

After appearing in a number of productions, she was catapulted to fame at age 24 for her role in Carson McCullers' American stage hit "The Member of the Wedding."

Later in her career, Harris for many audiences would come to epitomize 19th century American poet Emily Dickinson, in her performance of William Luce's 1976 one-woman play "The Belle of Amherst."

She won the 1977 Tony Award for Best Actress in the play recreating Dickinson's world by gossiping about neighbours, recounting daily household routines, and reciting the verse of the isolated, idiosyncratic and reclusive poet.

Harris "in a new twist on the old theatrical saw of an actor captivating an audience by reading the phone book" brought down the house by carefully and guilelessly reciting the poet's recipe for her Black Cake which included 19 eggs and five pounds of raisins," wrote theatre critic Louis Chaplin.

She won four other Tony Awards and received five more Tony nominations during her career in addition to a lifetime- achievement Tony Award in 2002.

Harris also won three Emmys, US television's highest honour, and was nominated for an Oscar for her role in the 1952 film "The Member of the Wedding," the movie version of the play that made her famous.

The actress best known for her stage work often said in interviews that an active career in the theatre did not encourage stable marriages, and she was married and divorced three times.

"At its best, the theatre is a balm for hurt minds," Harris said in a 2000 interview.

"It unites us as human beings, gives us a home, brings us together. You say: That's what it means to be alive, to be human, to feel your heart beat. That what it means. Theatre does that."