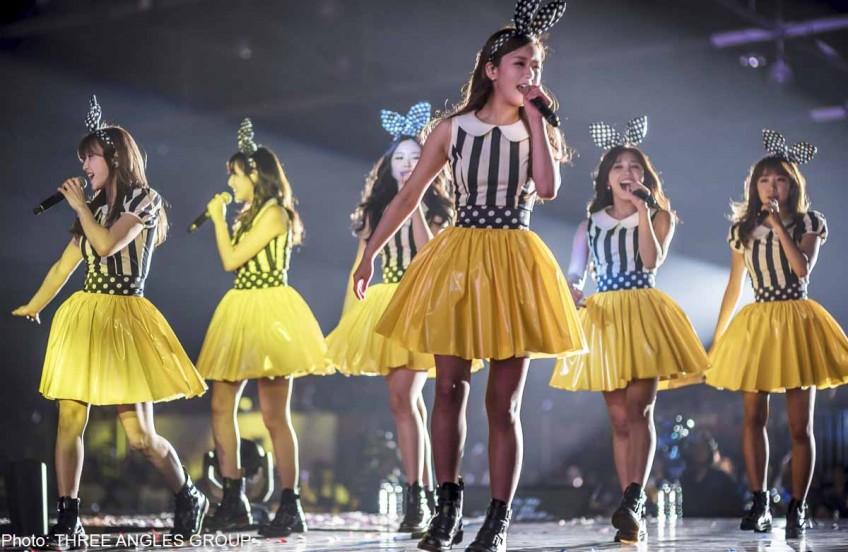 Sugar, spice and everything nice.

That is the formula of Apink's saccharine sweet success.

The bubbly K-pop sextet worked that formula at their first solo concert in Singapore last Sunday.

They serenaded, bopped and pouted their way into the hearts of the 3,500-strong crowd at the Max Pavilion, and also fulfilled their idol duties by declaring their gratitude to fans in endearing, stilted English and fluent Korean, coupled with coy smiles.

Singapore is their first overseas solo gig, after selling-out tickets at their Seoul full-length concerts in January.

Apink's feminine charm was a magnet for male and female fans alike, such as a bashful teenage boy holding his school notes as well as an enthusiastic 25-year-old Caucasian saleswoman who flew in from the United States.

Bubblepop tunes they may be, but they are embedded with addictive hooks with great sing-along potential and, more importantly perhaps, belted out by the doe-eyed lasses while they pranced around in outfits that ranged from all-white ensembles matched with knee high boots to Disney princess baby doll dresses.

The concert would be guilty of sugar overdose if not for the individual segments which showed different sides to Apink. Na Eun and Ha Young went sexy for the sultry tune Gone Not Around Any Longer, a tune originally performed by Apink's more risque counterpart Sistar19, a sub unit of girl group Sistar.

The duo gyrated sensually in skin-tight black outfit, a contrast to Apink's playful dance moves - a hint of a more mature transformation to come? So far, Apink has stuck to girl-next-door since their debut in 2011.

The bright spark of the show was spunky Eun Ji, who shot to fame in nostalgia drama Reply 1997 (2012) and also starred in melodrama That Winter, The Wind Blows (2013). Her powerhouse vocals rang through even in the group's techno-pop dance numbers. But it was during her solo rendition of American diva Beyonce's Listen that the audience could fully savour her impressive range.