China celebrities break off relationships with D&G after controversy

Many Chinese celebrities have issued public statements cancelling further co-operation with Italian fashion brand Dolce & Gabbana after it posted a controversial video on Sunday that many deemed racist against Chinese people.

The brand's ambassador in China, singer-actor Wang Junkai, announced via his studio that he and his office have broken off any previous engagement with the luxury brand.

"The premise of co-operation lies on exchange on equal grounds and mutual respect, as well as respect for each other's culture and history. One's motherland is not to be infringed upon, and one's motherland stands above all.

We here announce to rescind the contract with Dolce & Gabbana.

Starting tomorrow, Wang Junkai and Wang Junkai Studio will terminate all co-operation with Dolce & Gabbana," according to a statement released on the official Sina Weibo account of the star's studio last night.

Actress Dilraba Dilmurat, who has served as the brand's ambassador in the Asia-Pacific region, also issued an official statement rescinding all engagement with Dolce & Gabbana after the incident.

Wang personally showed support for his nation through social media as well.

"Beyond all doubt, you are the best CN (China)," the actor wrote on his Weibo account.

Dilraba echoed Wang's attitude with a post on her Weibo account, which read "Love you, our beloved motherland♥CN."

The clip released by Dolce & Gabbana on its Instagram and Sina Weibo accounts show a female Asian model in a glitzy red Dolce & Gabbana dress using chopsticks to eat pizza and other Italian foods. 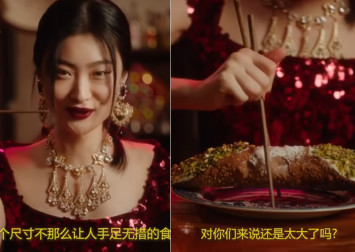 It was intended to promote the Shanghai show, but sparked outcry in China for its insensitivity, in part because of the model awkwardly attempting to eat Western food with chopsticks.

Early Wednesday morning, in a chat on Instagram between a netizen named "michaelatranova" and someone using the personal account of Stefano Gabbana, one of the brand's co-founders, Gabbana allegedly made insulting references toward China and Chinese people.

Dolce & Gabbana posted an announcement on its Weibo account saying: "Our Instagram account has been hacked. So has the account of Stefano Gabbana. Our legal office is urgently investigating. We are sorry for any distress caused by these unauthorized posts. We have nothing but respect for China and the people of China."

Indignation arose among Chinese netizens, with many calling on Wednesday for the show to be canceled. A-list celebrities such as Chen Kun, Huang Xiaoming and Li Bingbing said they would not attend.

Chinese actress Zhang Ziyi wrote "Self humiliation" on her Weibo account, alongside a picture responding to Gabbana's remarks.

Many Chinese modelling agencies, as well as models who were scheduled to walk the show, also said they would not be attending the event after the incident.

The brand did not give further details about the cancellation.

Major Chinese e-commerce platforms have removed all products under the brand of Dolce & Gabbana since Wednesday evening, according to a report by jinronghu.com.

That means outside of the official China website of the Italian fashion company, the brand's major e-commerce sales channels in the Chinese market have been practically cut off.

In addition, the duty-free shop at Haikou Meilan International Airport also announced on Thursday it has taken all Dolce & Gabbana products off the shelves.