Sources said Chinese actress Angelababy sought treatment only after filming ended, as she did not want to interrupt the filming even though she had injured her finger.

Chinese actress Angelababy has injured her finger while filming variety show Keep Running, according to the Sina Entertainment website.

Angelababy is currently filming the show in Anshan city in China's Liaoning province. She was spotted by netizens at a local hospital on Wednesday (March 13) night, wearing a silver jacket with her name behind it and accompanied by crew members.

Sources said she sought treatment only after filming ended, as she did not want to interrupt the filming even though she had injured her finger.

This is not the first time Angelababy was injured while filming Keep Running, the Chinese version of South Korean variety show Running Man. 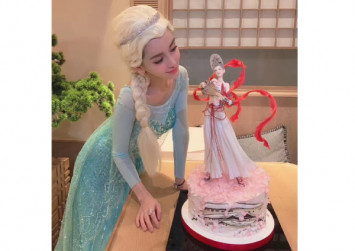 She was hit by a giant ball while filming the show in June 2017. Media reports in December 2017 said she also fractured one of her fingers while playing a game on the show.

Angelababy returned to film the show in April 2017 after giving birth to her son in January of the same year. She is married to Chinese actor Huang Xiaoming.