A mainland Chinese actress has apologised for releasing a photo in which she presented a controversial pose designed to show-off her slender waist and body shape.

The Z-shape, or “cartoon waist”, has been in fashion for weeks on social media in China, with women putting their legs flat on a chair while lying their upper body on the ground to show off a supposedly ideal slender figure.

The pose is in imitation of a cartoon picture of an unrealistic body shape created by an unknown Anhui-based designer that has widely been shared online.

Yang Mi, a popular actress in China, claimed she was “curious” and took up the challenge of replicating this “difficult stretching movement”, she said on Weibo.

She shared her photo online on Sunday (March 21) along with Chinese words: “it’s a bit difficult”.

The post received praise for her slimness and body flexibility, along with plenty of criticism.

“I don’t understand why so many people are following the trend to do this. Haven’t they noticed this is a sexual hint?” wrote one person on WeChat.

“It’s another torture for us fatty guys,” another person said.

A third person commented, “It’s really not necessary to do that. This is so boring and is a disgusting taste for beauty.”

Sun Yueli, a Shanghai-based orthopedist, wrote on Weibo that the pose could lead to injury.

“It will easily cause muscle injuries, and in the long term, will increase the hyperosteogeny risks in lumbar vertebra,” he wrote. “Don’t do this movement unless very necessary. Please take care of your waist.”

Under public pressure, Yang deleted her photo and made an apology the next day. 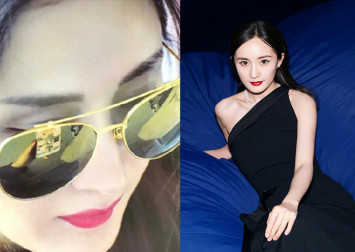 “I got to know that without guidance from professional teachers, this posture might hurt our body. I am very sorry for the misunderstanding to the public because of my incautious thought,” she wrote.

Posts about the image have been viewed 790 million times on Weibo, with 110,000 comments left on the website.

Some people stood by Yang, saying she just wanted to reveal her fit and healthy body and that people were overreacting.

Hou Hongbin, a Guangzhou-based feminist writer, said the pursuit of a cartoon waist reflected women’s anxiety over their bodies and absurd beauty standards for women.

“The viewpoints such as you can only choose from thin and death, a fat girl has no future, a beautiful girl should be measured less than 50kg have been viral,” Hou told the South China Morning Post . “A lot of women said they regard losing weight as their cause for a whole life.”