A handout photo. Jackson Yee is one of China's most popular young celebrities.

The Chinese pop star and actor Jackson Yee said on Sunday (July 17) he would not take up a post at the National Theatre of China on Sunday after his recruitment prompted accusations that celebrities were being given preferential treatment.

His hiring as an actor at the state-run theatre — which carries a guaranteed pension and other benefits — was particularly controversial after youth unemployment hit a record high last month and prompted calls for greater fairness and transparency in hiring.

Yee, who is known as Yi Yangqianxi in China and a member of popular boy band TF Boys, said he had applied for the role in a process that "completely complied" with the theatre's requirements.

"I never negotiated or discussed anything involving 'tailor-made recruitment' with the teachers of the National Theatre, nor did I use any so-called 'short cuts' to obtain enrolment," the 21-year-old said in a statement on Chinese social media on Sunday.

However, he went on: "Since I entered the industry, I have always hoped to bring a positive influence to everyone. However, this time, my behaviour has made everyone feel offended and dissatisfied, and also affected the National Theatre, which is the last thing I want to see.

"In order not to add to your troubles, after careful consideration, I have decided to give up on joining the National Theatre."

Earlier this month the theatre announced a list of new hires that included Yee and two other young stars, Hu Xianxu and Luo Yizhou.

It soon met with an online backlash, with people questioning if the trio were favoured because of their star power.

Others questioned the transparency and fairness of the hiring procedures and whether the three qualified as "unemployed individuals", one of the requirements for being hired by the theatre. 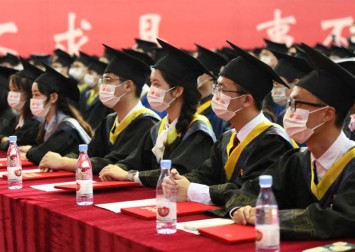 The issue has been one of the most searched topics on the social media platform Weibo for days and hashtags about Yee's announcement on Sunday attracted two billion views.

"If he was recruited according to the rules, no one would have any questions. But they should not create new rules for anyone," wrote one poster on Weibo.

Even Yee's announcement did not still the criticism, with another poster asking: "Why does he need to give it up if he was recruited without tricks then?"

Hu said on Sunday that he never enjoyed or exercised any privileges in the recruitment process. Luo has yet to comment on the controversy.

The row taps into a wider controversy about "bianzhi" — which means a stable career with pension and other benefits in government or government-affiliated institutions.

The competition for these jobs is becoming more fierce as they become more popular amid the current economic slowdown.

According to survey results released in April by recruitment platform Zhaopin.com, the number of people making government and public sector jobs their top career choice doubled last year and has continued to rise this year

This year, 44 per cent of new graduates want to join state-owned enterprises and 26 per cent favour government-affiliated companies or government departments.

On Saturday, the National Theatre of China said its recruitment process had followed all the regulations and was in line with its principles of "openness, equality, competition and merit".

Yee is one of China's most famous young celebrities and rose to stardom in his early teens as a member of the boy band TF Boys. He has also taken a leading role in a number of films, including the critically acclaimed drama Better Days.

The controversy comes at a time when the Chinese entertainment industry is facing tighter control from the authorities, who last year warned artists to ensure they behave morally both in public and private and "love the party, love the country".

This initiative has seen more celebrities hired by government-sponsored organisations and patriotic programmes.

This year, Yee took part in events celebrating the May 4 Youth Day and also starred in the patriotic Korean war drama The Battle at Lake Changjin.