Hong Kong singer-actress Karen Mok has come under fire on Chinese social media after showing her support for the upcoming ban on the consumption of cats and dogs in the southern Chinese city of Shenzhen.

Shenzhen's move followed a resolution passed by the standing committee of the National People's Congress in February to ban the trading and consumption of wild animals, a practice that has been blamed for helping to spread the coronavirus that causes Covid-19.

Shenzhen's ban also covers other species regularly consumed in China such as snakes, turtles and frogs, and comes into effect on May 1.

Mok, known as an animal-rights activist, regularly raises awareness on social media about endangered species and various non-profit organisations which focus on animal conservation. She is also an ambassador for the Animals Asia Foundation and Hong Kong Society for the Prevention of Cruelty to Animals.

After Shenzhen's ban was passed on April 2, Mok posted on Weibo: "This news really makes one feel inspired. Looking forward to the near future when the whole country legally bans the consumption of cats and dogs." 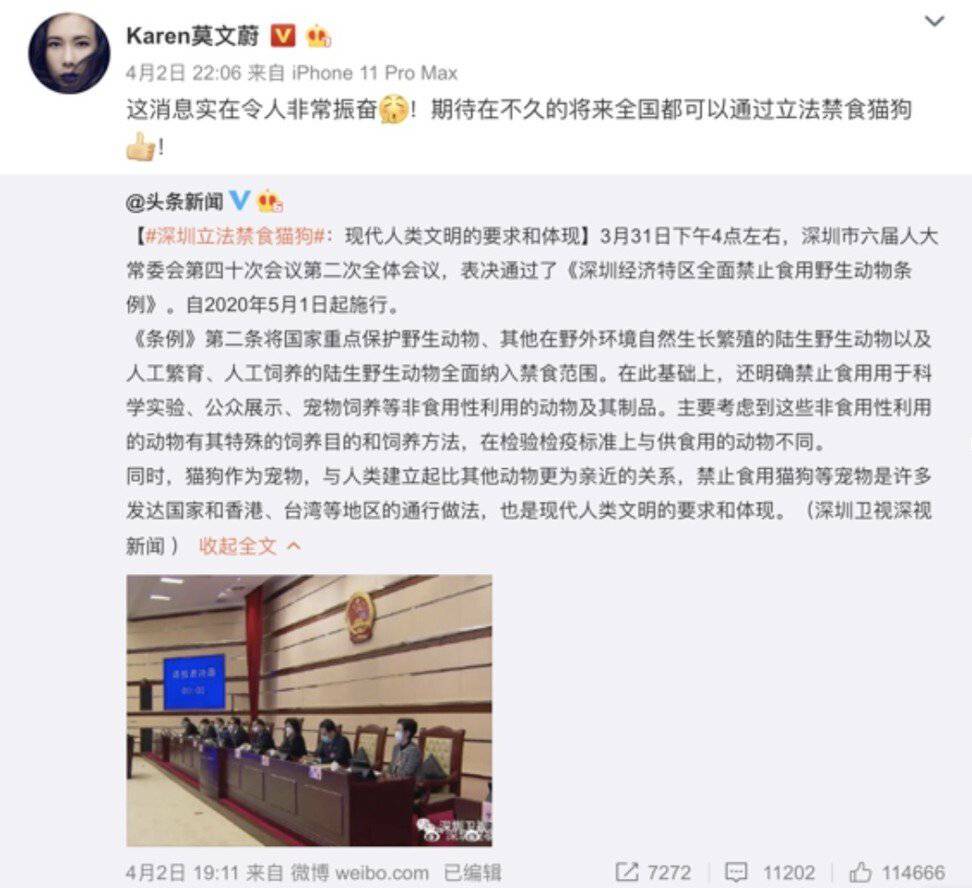 However, Mok - who has more than 14 million followers on Chinese microblogging site Weibo, was slammed by Chinese netizens who oppose the legislation and accused her of portraying China as uncivilised.

One user posted that the ban "is understandable, there's almost no argument there … but the debate about not allowing [people] to eat dog meat has always been heated, for the reason that developed Western countries don't eat it. This is hilarious … isn't this saying that mainland China isn't modern or civilised?"

Another netizen claimed that the move to ban dog meat came after pressure from Western media who are now scrutinising China due to the novel coronavirus apparently originating from a market in Wuhan where many wild animals were traded.

The Weibo user said: "You can ban cats and snakes, but I don't think you can fully ban dog meat. Also many other countries consume dog meat, yet foreign media just can't take their eyes off China. Who told us [China] to be popular in the 21st century?" 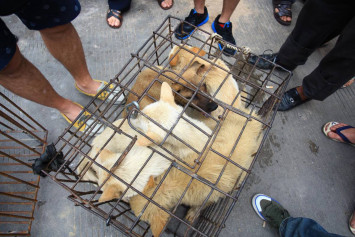 Referring to Mok's call for the ban to be extended to all of China, another user felt that the ban would cause a domino effect and lead to all meat being outlawed.

The comment reads: "Goodbye! The whole country is gone. Can't eat dog meat, but can you eat lamb? What about beef? What about chicken? Soon everyone won't be able to eat meat."

But other Weibo users showed their support for Mok, saying people who ate cats and dogs were "vicious" and "unreasonable".

In passing the law, the Standing Committee of the Sixth Shenzhen Municipal People's Congress pointed out that cats and dogs were common household pets, and had a closer relationship with humans than other animals.

This food safety legislation was also introduced after recognising that "prohibiting the consumption of cats and dogs is a common practice done in Taiwan and Hong Kong, and is also a requirement and embodiment of modern human civilisation".