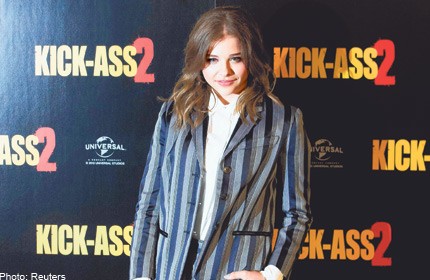 At 16 years young, actress Chloe Grace Moretz has already rustled up an impressive collection of on-screen miscreants. Among her most high-profile film outings are as a vampire in Let Me In (2010), a vigilante in a pair of Kick-Ass films (2010, 2013), and a bullied, outcast teen in the forthcoming adaptation of Stephen King's seminal novel, Carrie.

Not that she goes out of her way to hunt for jobs playing characters who are outsiders, she says.

"I don't think I actively look for the losers," she says with a laugh.

In Kick-Ass 2, which opens in Singapore tomorrow, she is troubled teenager Mindy Macready, aka Hit-Girl, the ninja-skilled girl who made a splash in the first Kick-Ass film. Now an orphan in the sequel, Mindy is marginalised in school and again finds relief in donning her vigilante outfit and going out to dispense justice on the streets.

Moretz says: "I did a lot of fight training. It is technique more than training and the less muscle you build, the more agile you are, especially with jujitsu and the martial arts. It is about leverage.

"A lot of the stuff I was doing was all leverage and when you are little and you have a low centre of gravity, it is much easier to flip a tall guy. Saying that, playing Hit-Girl is the hardest role for me, physically, for sure."

The most emotionally challenging role she has ever played, however, is the forthcoming adaptation of Carrie, with Moretz and Julianne Moore taking on the roles made famous by Sissy Spacek and Piper Laurie in Brian De Palma's 1976 version of the story.

Carrie, who is abused at home and in school, "was the hardest role emotionally because it is so very much the opposite of what I am", explains Moretz.

"I had to strip away everything that I knew. I am a worldly girl. I have been around the world and seen different things, but all Carrie has seen is pretty much the inside of her house. Her mum locks her in a closet. It is one of the darkest roles I have ever gone into. "She has no way out really and it is terrifying to be in that mind-frame all day because you are so stuck. As an actor, you are so inside the character's mind that you feel stuck."

Off the set, she would "do anything to break free", playing lots of Abba songs and "reminding myself I was good and free".

Although Carrie is a much darker film than the Kick-Ass movies, Moretz says that she does see synergy between the characters. "They are both very much out of their element while they are at school," she says.

"But there's also a big difference because Mindy is the strongest girl you will ever meet. She knows what she wants and she knows exactly how to get it and she is not afraid to stand up to anyone. She is thrown off her game at school, but she still wins in the end. "Whereas Carrie, she is spat on, set on fire, kicked - people will do anything to her and she just takes it and that is her problem. She pens it all up inside of her until it bursts."

With her busy filming schedule, she is spared the trials and tribulations of high school; instead, she is schooled at home. She tries to retain a normal life, despite a film career that has seen her collaborate with well regarded film-makers such as Martin Scorsese for Hugo (2011) and Tim Burton for Dark Shadows (2012) and has upcoming projects with French film-maker Olivier Assayas (Irma Vep, 1996) and American indie stalwart Lynn Shelton (Humpday, 2009).

"My friends are just my friends," she says of her home life. "They are just so supportive of me and they want me to be happy and they know that when I am with them, I don't like talking about my business, just like I don't talk to them about what they are doing at school. We just do stupid things."

Does she ever miss the fact that she is not in school with them?

"No. I definitely do not. I cherish that I am allowed to travel the world and come to London. The things I learnt from my history books, I am going to see for real. "I have had a very interesting childhood and I am very happy with it, very happy."

Professionally, she says that she looks up to Helena Bonham Carter, Moore, Natalie Portman, Winona Ryder and Meryl Streep, though she finds her family her biggest inspiration. One of her four older brothers, Trevor, is a producer on Kick-Ass 2, while her mother Teri finds and approves all her roles, including the Kick-Ass films.

"I always say it's my family that keeps me grounded," Moretz says, "but it is also choosing to keep people around you who have the same state of mind as you, whether that is your publicist, your hair and make-up team, whatever."You have to have good people around you because one bad egg in the bunch makes them all rotten."