Not many celebrities can say they have been married for over three decades. But Hong Kong actor Chow Yun Fat and his wife are one of the few exceptions.

Their marriage has lasted for 31 years, and it almost did not happen.

In a 15-episode interview with Apple Daily, titled My Husband is Chow Yun Fat, his wife, Jasmine Tan, spoke about their early days as a couple.

The Singaporean revealed that when she first started dating Chow in the mid-80s, the actor had once told her: "You must remember something, I will not marry you."

Before he dated Tan, Chow was once married to Hong Kong actress Candice Yu in 1983, but the two separated after nine months. His experience at a failed marriage could probably be one of the reasons why he thought he would not be marrying again.

Some women would have walked away if their boyfriend told them marriage was not on his cards, but Tan felt differently.

"To me, when you love someone, it is unconditional. You shouldn't think too much about things. Why must you let such things weigh you down?" said Tan in the video interview.

So when Chow randomly popped the question after an overnight shoot in New York for the movie An Autumn's Tale, Tan was shocked.

There was no marriage proposal with a candlelight dinner, a diamond ring or roses. Just a simple: "Why don't we get married?" sealed the deal for the two.

Till today, Tan has never questioned Chow why he decided to marry her when he said he would not.

"I didn't ask him why he changed his mind. There's no need to. He decided to marry me, aren't I considered very lucky indeed? I don't want to ask too much," she explained.

Although the two are known to have been married in 1987, Tan revealed that they had registered their marriage in the United States in 1986 - for just US$15 (S$20).

There was no elaborate ceremony and they did not tell their parents too. So when her father found out that they were married, Tan said he was not happy at all.

"Afterall, I am the eldest daughter in the family. Sometime in 1987, Chow said 'Okay, let's tell your dad that we'll host a wedding banquet'. Everyone thought we married in 1987, but we actually got married in 1986."

The couple officially held a wedding banquet on June 5, 1987, where Tan proclaimed that "heaven has given me the best gift ever, which is to be Chow Yun Fat's wife." 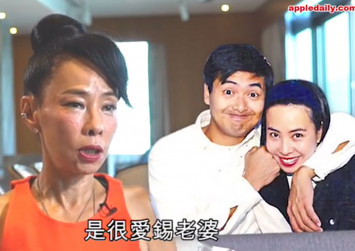 When asked if she was disappointed that she did not have a dream wedding or proposal, Tan answered: "What's there to be disappointed about? It's so surprising for me. He had said he won't marry me but he ends up taking me to the marriage registry!

"I've never thought of holding a dream wedding. Both of us are good together, it's as simple as that," laughed Tan.

Although born in Singapore, Tan had already moved to Hong Kong in her early adult years to help out with her father's business there.

Before she started dating Chow, Tan said she had her fair share of suitors and one of them was from Indonesia. But he did not give her a sense of security. Tan also admitted that it was fate that brought the two together.

"I did not care whether Chow was a celebrity or whoever, because I wasn't a fan of his. From the moment we got to know each other, to when he started chasing me and told me he won't marry me - everything seemed to happen quite naturally and we started dating just like that."

Although the God of Gamblers may seem to be rather unromantic in asking Tan for her hand, he did seem to be very into Tan during their early courtship days.

But how did the two get to know each other? Tan said it was through a friend who kept saying that he knew Chow and that they were hanging out together.

So the sceptical Tan told her friend, "So you know Chow? Why don't you ask him to visit Singapore one day and introduce us?"

The first time she met Chow was when she was about to leave her dad's office when she received a call from the actor. He called from Changi Airport and asked Tan to have a meal together as he was not able to get on his flight.

"The next day in the morning, I sent Chow off at the airport - you know we Singaporeans like to send people off at airports. So I went there in my shorts, slippers and uncombed hair to send him off," laughed Tan.

Perhaps it was this down-to-earth personality that attracted Chow.

"Since that moment until he arrived in Hong Kong, Chow would call me and write postcards to me every single day. Crazy right? He called me two to three times a day," said Tan, who still keeps the postcards till today at her home in Singapore.

Although the couple may not have had a romantic beginning, their lasting marriage has seen them through tough times, especially when faced with the death of their unborn child in 1991.

Till today, the duo are seen as one of the few marriage role models in the showbiz industry - truly defining what #couplegoals are.