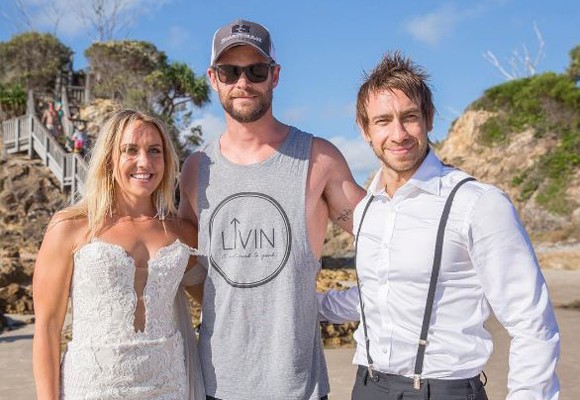 Your wedding day is already meant to awesome. But having Thor drop by your celebrations? That's icing on the cake.

A newlywed couple "Anneka and Kent" were getting their wedding day portraits taken in Byron Bay, Australia, when the photographer noticed the actor on the beach.

"It was Chris Hemsworth on the beach and he (the best man) was like, 'Hey, do you think you could get a photo with the bride and groom?' And he said, 'No worries,'" Anneka told news.com.au.

Anneka told the news outlet she had no idea who the mega-famous Australian was, and kept asking her new husband what was going on.

"I was wondering, 'Why we were getting a photo with a random person?' I was saying, 'Who is this person?'" she told the news outlet. "[Kent] was getting embarrassed that I kept asking who this person was and he said, 'Chris Hemsworth.'"

He's been set up there for a while now, while filming Thor: Ragnarok on the Gold Coast nearby. He also seems to be doing a tonne of surfing and generally just chilling out. Wouldn't you?