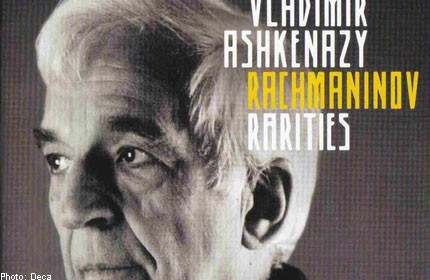 Rachmaninov Rarities is a compilation of short works, studies and salon pieces written by great Russian composer Sergei Rachmaninov as a student, and includes famous recordings like seven Morceaux De Salon, as well as less-heard ones like Piano Piece In A Flat Major.

SINGAPORE - After 50 years, Russian-born Icelandic pianist Vladimir Ashkenazy has finished his complete survey of the pianomusic of the great Russian composer Sergei Rachmaninov (1873-1943).

In 1963, Ashkenazy put out his first album on the Decca label, comprising two piano concertos by Rachmaninov.

That same year, he stuffed a suitcase with sheet music by the same composer and left the Soviet Union for the West, never to return.

It is from this stash that he has selected the pieces on this disc.

Admittedly, these are not among the best music of the great Russian pianist-composer: mostly short works, studies and salon pieces written as a student.

The best known are the seven Morceaux De Salon (Op. 10), including the melancholic Barcarolle and playful Humoresque, which Rachmaninov recorded himself.

Much less often heard are his recently discovered carillon-laden Piano Piece In A Flat Major, the vertiginous Fugue In D Minor, Prelude In F Major (its cello version is better known) and the Oriental Sketch, a "railway" piece inspired by the Orient Express.

Also included are the four character pieces originally designated as his Op. 1, before being displaced by the First Piano Concerto.

Ashkenazy plays his own transcription of the song Sad Is The Night (Noch Pechal'na) Op. 26 No. 2, an exquisite gem in its own right.

The set concludes with Rachmaninov's virtually unknown transcription of Nunc Dimittis from his choral masterpiece Vespers Op. 37, a reflection of his Russian Orthodox faith.

Now 76, Ashkenazy shows little sign of his age, rewinding the clock in these revealing performances.

The music of Rachmaninov has never had a truer or more complete champion.