Comedy preview: Whose line is it anyway? 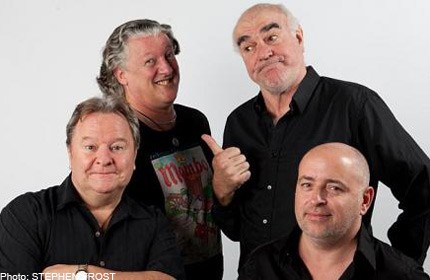 The Singapore line-up of the comdey show Whose Line Is It Anyway? will feature (clockwise from top left) Andy Smart, Stephen Frost, Ian Coppinger and British actor and comic Steve Steen.

British actor and comic Steve Steen makes his improvisational comedy acts look effortless, breaking into song at a moment's notice and switching between euphoria and terror in a heartbeat.

If indeed improv comes easy to him now, he has earned it - the hard way.

In a telephone interview with Life! to promote his upcoming show here, the 58-year-old wryly recalls a live show abroad: "We once did a show in the Caribbean, in Barbados, which I'd never been to before.

In front of all these people from Barbados, I was suddenly asked to sing a reggae song.

With enough experience under his belt, he says he has learnt to deal with unfamiliar cultural references that might be thrown his way.

These skills will come in handy when he performs in Singapore this week as part of the cast of the hit British improv comedy series, Whose Line Is It Anyway? (1988-1998).

"You just have to kind of go with the flow. When somebody shouts out a place, and the audience starts laughing, you just know that it is the red-light district," says Steen, who started out as a theatre actor in 1972 in productions staged at playhouses and events such as the Edinburgh Fringe Festival and Arts Theatre London.

As part of his acting training, he began taking on improv comedy after attending classes conducted by American actor John Ratzenberger, best known for his role as the postman in the classic sitcom Cheers (1982-1993).

After appearing in the third season of the iconic Rowan Atkinson comedy series Blackadder, which aired in 1987, he was recruited into the cast of Whose Line Is It Anyway? from 1991 to 1993.

Viewers in Singapore who followed Whose Line Is It Anyway? about a decade ago would probably remember it as the American show hosted by Drew Carey, as it was the United States version which was popular here.

It was originally a British television show that took off in 1988 from a radio segment in the same year. Among its most well-known cast were Wayne Brady, Ryan Stiles and Colin Mochrie, who went on to anchor the US version of the show, which aired from 1998 to 2007.

A new American revival of the show has just been released last month, with actress Aisha Tyler (TV's Ghost Whisperer) as host. Once again, Stiles, Mochrie and Brady anchor the show.

The shows in Singapore this week, which will take place at Klapsons The Boutique Hotel from Thursday to Saturday, will also feature Andy Smart, Stephen Frost and Ian Coppinger.

For those unfamiliar with the format of the show, the comedians have to conjure jokes, songs and skits on the spot to audience suggestions.

Sometimes, the cast even have to be as physically agile as they are quick-thinking.

Says Steen, who is single: "Once, someone shouted out 'human pyramid' in a show in Dublin, Ireland and we weren't the most physically adept men then. I couldn't stand up for two days after that, but we all did it."

Can the audiences in Singapore expect standards that are on a par with what is on television?

"TV was great, but it was kind of clinical, smooth and streamlined," quips Steen. "The main difference is that in the live show, you can't take out the bits that are kind of rough around the edges.

"You have to work a bit harder, but the spontaneity and the laughs you get from it are also much more rewarding. It's difficult, but it's a challenge that we are willing to take on.

WHOSE LINE IS IT ANYWAY?