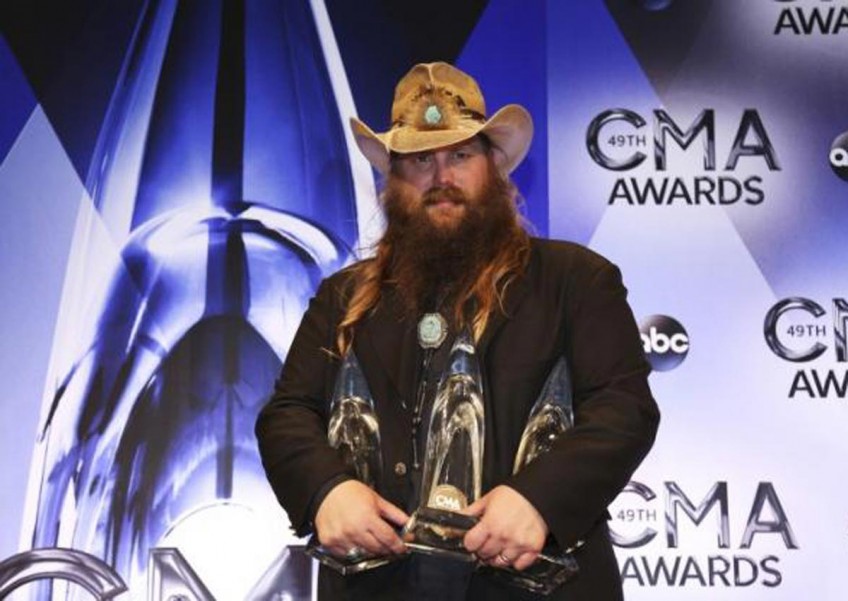 Musician Chris Stapleton poses backstage with his awards for Male Vocalist of the Year, New Artist of the Year and Album of the Year for Traveller during the 49th Annual Country Music Association Awards in Nashville, Tennessee November 4, 2015.
Reuters

Stapleton's "Traveller" spent its second consecutive week at No. 1 with 124,000 album units sold in the week ending Nov. 12, according to figures from Nielsen SoundScan.

Church's "Mr. Misunderstood" climbed one spot to No. 2 with 65,000 units sold. Both Stapleton and Church saw boosts in sales following their appearances and wins at the Country Music Awards earlier this month.

Other new entries in the top 10 of the Billboard 200 chart included country singer Tim McGraw's "Damn Country Music" at No. 5, while a re-issue of the Beatles' 2000 compilation album "1," featuring all of the British band's chart-topping hits, made its debut at No. 6. Singer-songwriter Sara Bareilles' "What's Inside: Songs from Wait" entered the chart at No. 10.

On the Digital Songs chart, which measures online download sales, Adele's ballad "Hello" held onto the top spot for a third week with 480,000 downloads.