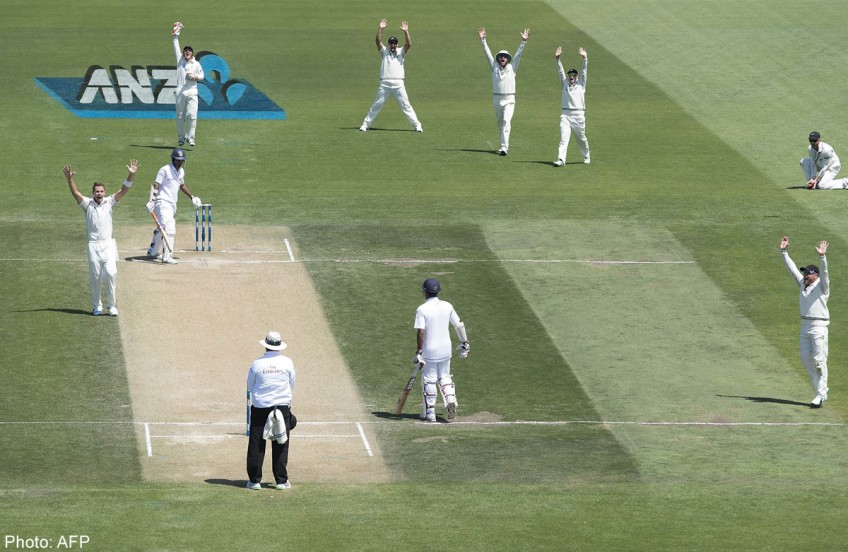 WELLINGTON - Concerns Friday over injuries to Tim Southee and Rangana Herath disrupted preparations for New Zealand and Sri Lanka on the eve of the second Test in Wellington.

Both camps have given their key bowlers until just before the Test starts on Saturday to prove their fitness.

With yet another green wicket promising plenty of bounce, the toss will be crucial with New Zealand and Sri Lanka both looking to bowl first.

Sri Lanka have signalled they now have a plan to combat the dominance of the hosts' captain Brendon McCullum, who set up the Black Caps' eight-wicket win in the first Test in Christchurch when he blasted 195 in the first innings.

Wellington's Basin Reserve is a favourite ground for McCullum where last year he led New Zealand to victory over the West Indies by an innings and 73 runs, and scored 302 in a match-saving knock to draw a Test against India.

"We have a few plans (for McCullum) so we will look to try and execute that and perfect it," Sri Lanka captain Angelo Mathews said.

"When a guy smashes you all over the park and gets almost a double hundred it's quite hard to set fields because he was not orthodox. We have to be patient and wait for his mistakes, which will come."

Left-arm leg spinner Herath is central to Sri Lanka's strategy, having removed McCullum in three of the four innings when they last met in a two-Test series just over two years ago.

He finished that series with 21 wickets at 13.90 and was sorely missed by Sri Lanka when he did not play in the Christchurch Test because of a hamstring injury that continues to be troublesome.

"He has to go through a fitness test in the morning and then we'll see," Mathews said.

McCullum: Bring it on

McCullum said being personally targeted by Sri Lanka was "a good challenge", and was more concerned about whether strike bowler Southee would recover from an ankle knock.

"Tim's probably the major concern at the moment. We'll see how he scrubs up in the morning and if we think he's a risk that's not worth taking, then we won't take it," he said.

Doug Bracewell will share the new ball with Trent Boult should Southee be ruled out, but otherwise New Zealand are likely to field an unchanged lineup even though Kane Williamson is nursing a sore shoulder.

The first Test win completed a golden year for New Zealand in which they won five Tests for the first time, and McCullum wants to continue the momentum to push them up the world rankings with fifth spot beckoning.

Despite moving up only one place to seventh in their stellar year just gone, the Black Caps have closed the gap on India and Sri Lanka immediately ahead of them.

Sri Lanka, meanwhile, considered shoring up their batting with the possible inclusion of Dinesh Chandimal in the middle order in place of Niroshan Dickwella, as Mathews said they would leave nothing to chance to square the series.

"We've got no choice other than going out there and playing positive cricket. If you lose 1-0 or 2-0 it doesn't really matter as long as you play good cricket, so we're looking to turn things around by winning this game."