Critics love to hate The Newsrooom 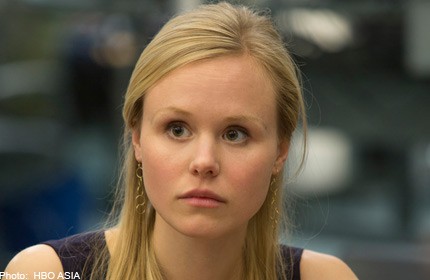 The screenwriting gods have been good to Aaron Sorkin.

His many successful creations include the award-hogging television political drama The West Wing (1999-2006); The Social Network (2010), winner of Best Adapted Screenplay at the Oscars and Golden Globes; and the 1992 film A Few Good Men, which he based on his own play.

After such adulation, the reaction by some critics to his latest TV creation, The Newsroom, must have been quite a blow to the 52-year-old.

As the show enters its second season, which is being broadcast in Singapore on HBO (StarHub TV Channel 601/655), media commentators have been mercilessly dissecting both the series and their own inability to stop watching it.

Inspiring headlines such as "Trying to tolerate The Newsroom" and "Is The Newsroom the best bad show ever?", the show appears to have singlehandedly revived the notion of "hate-watching", which is what critics seem to be doing week after week just so they can find more reasons to dislike it.

But while the drama has been slated for everything from its over-idealised depiction of journalism to its penchant for having female characters turn into bumbling wrecks over men, few have taken issue with the calibre of the cast, which is packed with wellregarded, theatre-trained actors such as Jeff Daniels, Sam Waterston, Alison Pill and Thomas Sadoski.

The actors chatted recently with Life! and other reporters at a press event in Beverly Hills, where they defended Sorkin and said they embraced the divided critical response.

Sorkin, who writes most of the show, reportedly took the criticism to heart and for the second season, hired a whole new writing staff as well as a team of paid consultants, including journalists, to help come up with new storylines.

Waterston, the 72-year-old who plays Charlie Skinner, the head of the fictional news channel, says: "What a brave man, to be able to do that. Aaron has the capacity to take this stuff, some of which I've since learnt was pretty direct and insulting, and turn it into something he found really useful for his own work.

"That's the way it's supposed to be between critics and creative people," says the veteran actor, who is best known for his Oscar-nominated role in The Killing Fields, the 1984 film about the Khmer Rouge in Cambodia, and more recently for playing a district attorney on the TV crime show Law & Order from 1994 to 2010.

Daniels, who plays the lead character of newsroom anchor Will McAvoy, has had encounters with rabid right-wingers who take issue with Sorkin's liberal politics, which are shared by many of the show's main characters.

The fact that Will is a Republican - and apparently the only one in the fictional newsroom - does not mollify those whose political views are at that end of the spectrum as well. Daniels, 58, says he gets "lectured" by such viewers all the time.

And that he tells them: "Well, then, you're not watching the show. Because if you really watched it - and maybe Aaron doesn't get to it quick enough for them - you'd see that Will is a moderate Republican, which as we know is a vanishing breed in America, and that his issue is with the Tea Party and the far right."

Daniels - whose portrayal of Will has earned him a nomination for Outstanding Lead Actor in a Drama Series at the upcoming Emmys - believes that there is nothing wrong with the characters' highly idealistic and, in Will's case, speechifying views about their journalistic mission, because it merely expresses where they want to be, not where they are.

The characters in the show say they are "on a mission to civilise and that we are going to re-invent the news - but we never get there", says the actor, who made his name with films in the 1980s such as Woody Allen's The Purple Rose Of Cairo (1985) and Terms Of Endearment (1983).

"We talk about it, we try, we succeed on some days and fail miserably on the others." Pill, who plays junior producer Maggie, also feels that the claims about Sorkin and the show having "a woman problem" are unfair.

The 27-year-old, who had supporting parts in Milk, the 2008 film about the gay rights movement, and the 2011 Woody Allen comedy Midnight In Paris, knows that some people are annoyed that Emily Mortimer's character Mackenzie, for instance, is frequently making mistakes and having to apologise to ex-boyfriend Will, even though she is one of the senior producers on the show and ostensibly Will's boss.

"I understand the criticism because I'm a feminist. But I also think that some of the smartest people in the world are also so dumb in other ways. Women have to be able to make mistakes too because the problem is that we're either too perfect and put on a pedestal or we're the naggy bitch. Both are equally sexist and walking this line as a woman, as a woman actor and as a man writing for women actors is very hard."

Sadoski, who plays Don, another producer on the news show, makes the same point, and claims that the cast and crew knew from the beginning "that we were going to push some buttons, particularly with journalists, because journalism in our country is itself so polarising right now".

"But it's worthwhile to have a discussion about the state of journalism because one of the fundamentals of democracy is to have a well-informed electorate and we rely on journalists to give us the facts that we need to be good citizens," says the 37-year-old, an award-winning stage actor who performed in Singapore three years ago as part of the Sam Mendes-directed The Bridge Project.

''I think the fact that we slotted right into the discussion and became polarising ourselves is a good indication that we're in the right ballpark, rather than having everybody hate us or everybody love us."