The Cursed: Dead Man's Prey movie review - Korean zombie thriller has one of the best action scenes of 2021

A journalist and self-styled “urban detective” is drawn into a bizarre murder case connected to a huge pharmaceutical scandal in The Cursed: Dead Man’s Prey, a spin-off feature film from the 2020 television series The Cursed.

Scripted by Yeon Sang-ho (Train to Busan), the film flits seamlessly from supernatural horror to police procedural and industrial espionage tale, and audiences will require little, if any, foreknowledge of the original TV show.

A stand-out action set-piece halfway through involving a swarm of rampaging zombies that owes more to Busby Berkeley than George A. Romero is worth the price of admission alone.

Police are left baffled after a man is murdered in his flat by a killer, who has himself been dead for three months.

His reanimated corpse somehow gained entry to the victim’s home before biting him and poisoning him with a toxin more commonly found in pufferfish.

A strange marking found on the murder suspect’s wrist also suggests some kind of spell or ritual may have taken place.

Kim Jin-hee (Uhm Ji-won) is on live radio promoting her new book when she is confronted by a caller claiming to be the killer.

He requests a meeting, to be live-streamed the following day, where he demands that the CEO of a major pharmaceutical company issue a public apology.

The caller does not clarify what the chairman needs to apologise for, only that one member of his senior management will be murdered each day he refuses to make a statement.

The killer is then revealed to be a former employee of the company.

Fortunately for Jin-hee, her regular collaborator So-jin (Jung Ji-so), a teenage girl with powers that connect her to the supernatural, returns from Japan to assist in the investigation. 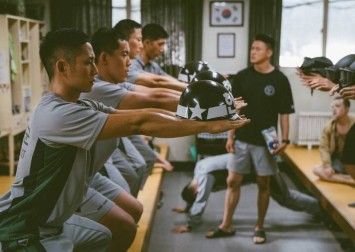 Meanwhile, chaos breaks loose in the upper echelons of the family-run conglomerate, as the CEO’s daughter (Oh Yoon-Ah) chooses this moment to make her play for total control.

Yeon and director Kim Yong-wan add elements of shamanism and weirdly double-jointed ghouls to the hordes of rampaging zombies, all of which are increasingly prevalent in Korean horror films.

The film also taps into an undercurrent of xenophobia and distrust for migrant workers in the country, as well as taking playful potshots at the nepotism within Korean chaebol.

For the most part, however, The Cursed: Dead Man’s Prey is a zippy, occasionally grotesque supernatural mystery bolstered by a show-stopping chase sequence sure to go down as one of the year’s finest action sequences.