Debuting with a box-office hit 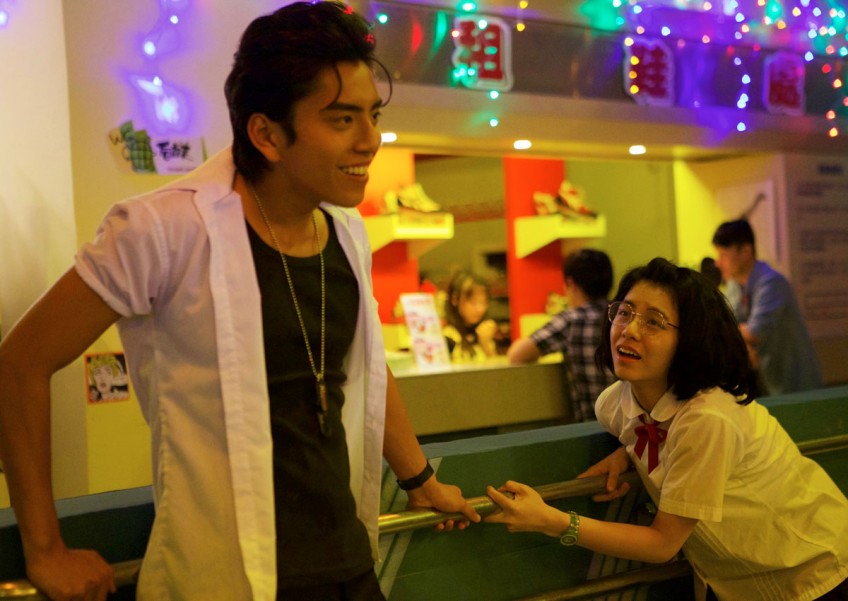 Directing your own movies has its perks. Take it from Taiwanese director Frankie Chen, who invited her superstar idol Andy Lau to make a cameo in her first movie, Our Times.

Gushing in an interview with Life over the weekend, the 41-year-old says in Mandarin: "I was very professional on set. But when we were discussing the script, I have to admit I was star-struck. He sat next to me. I could barely concentrate on what he was saying. I was admiring his wrinkle-free face and wondering how he managed to maintain himself so well.

"I've bought almost all his albums. Did you know he released a Japanese album?"

Beneath the adoring fangirl who scored a selfie with the Heavenly King is a savvy film-maker and marketing genius. She is behind this year's biggest Taiwan flick - romantic comedy Our Times. It is now leading the box office in Taiwan with NT$400 million (S$17.1 million).

She was promoting the movie in Malaysia over the weekend alongside its breakout stars - actress Vivian Sung and actors Darren Wang and Dino Lee.

This is no beginner's luck for the rookie director , who has garnered a Best New Director nomination at the Golden Horse Awards next month.

Like Angie Chai, another powerful Taiwanese producer who made the switch from television idol dramas to teen movies, Chen has a track record of producing hit TV series such as period drama Prince Of Lan Ling (2013) and idol dramas Prince Turns To Frog (2005), Fated To Love You (2008), My Queen (2009) and Autumn's Concerto (2010).

The original drama earned both critical and popular acclaim when it aired in Taiwan - it was a ratings hit and won Best Television Drama at the 2008 Golden Bell Awards.

So what is this producer-turneddirector's secret to whipping up winning entertainment content?

She says matter-of-factly: "I'm an audience member too. That's why I know what they want. The majority of the audience treat movies and TV dramas as entertainment.

"I come from a commercial background and that's why I put the audience first. For the industry to flourish, it has to prosper, make money. Only then will it draw talent and financial investments."

With the goal of entertaining audiences, Chen created a retro, feel-good movie about first love.

She says: "In a society full of angst and frustration, why do people watch movies? I want the audience to walk out filled with positive energy."

Conjuring nostalgia with a plot set in the 1990s, the movie is touted as a relatable story of an ordinary schoolgirl, Truly (Sung).

The bespectacled nerd is besotted with her idols - Cantopop star Lau and A-star model student Ouyang Extraordinary (Lee). As fate would have it, she ends up embroiled with the school's troublemaker, Hsu Tai-yu (Wang).

For her convincing portrayal of the bumbling Plain Jane, Sung has garnered a Best Actress nomination at next month's Golden Horse Awards.

Our Times has drawn comparisons to another hit youth romance, You Are The Apple Of My Eye (2011), based on director-author Giddens Ko's semi-autobiographical novel, The Girl We Chased Together In Those Years.

Addressing the alleged similarities, Chen says: "It can't be helped. Both movies are set in the 1990s and the actors wear school uniforms and take exams.

"But the director and the script are different. How can my youth be the same as someone else's?"

To create an authentic story for Our Times, Chen poured her heart out to the scriptwriter - sharing details of her puppy love and schooldays.

Wistfully, she says: "I had my own Hsu Tai-yu. He was really nice to me. He had to make the effort to leave his house to use the public phone because it was an era with no mobile phones.

"He would call my house, pretending to be my tuition teacher in case my parents picked up the phone."

In real life, she has found her soulmate. She has two children with her husband of 17 years, who works in show business.

Beyond her personal stories, she and her team paid much attention to detail to transport the audience back to the 1990s.

To help the young cast get into character, the director requested that mobile phones be kept away during their pre-filming rehearsals.

She says: "I wanted them to experience the inconvenience and the waiting. In the past, we sent love letters and had to wait in anticipation for a reply. Now, we simply send a text message and get an almost instant reply.

"Why do we have such vivid memories of the past? I think it's because life moved at a slower pace and we took the time to savour the experience."

She reveals with a laugh that the actors went back to using their phones outside of lesson time.

"Once they left the classroom, they broke the rule. Our lives are too deeply intertwined with our mobile phones. We simply can't get away from our devices."

Our Times opens in cinemas tomorrow.

Cape No. 7 is the highest-grossing local film in Taiwan to date.

The sleeper hit was made on a humble budget of NT$50 million and helmed by a relatively unknown cast and director Wei Te-sheng. Lead actor Van Fan had enjoyed modest success as a singer, and lead actress Chie Tanaka had little experience.

The romantic comedy - about a struggling band in the seaside town of Hengchun - struck a chord in audiences and critics. Tourists thronged the town and the film took home six awards at the 2008 Golden Horse Awards, including the Outstanding Taiwanese Film-maker award.

The blockbuster tapped on the true story of an indigenous Taiwan tribe's fight against the Japanese colonial forces in the 1930s.

The high school romance was based on director-author Giddens Ko's semi-autobiographical novel The Girl We Chased Together In Those Years.

The movie catapulted lead actor Ko to fame and he won Best New Actor at the 2011 Golden Horse Awards.

The triad movie centres on the rivalries and brotherhood of mobsters in Taipei's shady, red-light district of Monga in the 1980s.

As the title suggests, this environmental documentary gives audiences a bird's eye view of Taiwan's scenery - from areas of unspoiled natural beauty to pollution-scarred lands.