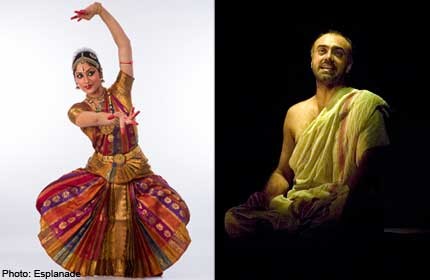 Without it, he might never have formed top pop duo Colonial Cousins, which stage their first public concert in Singapore in 10 years on Nov 23, during the annual festival of Indian arts, Kalaa Utsavam.

Ticket sales begin today for the Nov 15 to 24 programme at the Esplanade - Theatres On The Bay.

This year, the festival line-up is broader than ever, with 17 ticketed and 43 free performances, ranging from pop concerts to dance masterclasses and also an evening with best-selling Indian writer Chetan Bhagat (right), whose 2004 comic novel of college life, Five Point Someone, was made into the 2009 Bollywood blockbuster 3 Idiots, starring Aamir Khan.

The Colonial Cousins concert is a rare treat for local fans since Lewis, 53, and his musical partner, singer Hariharan, 56, are more used to performing solo here.

Hariharan's November 2002 concert with Bollywood vocalist Mahalakhsmi Iyer was one of the earliest performances held at the Esplanade - Theatres On The Bay. The Colonial Cousins' last public concert here was at the Singapore Expo in 2000, though they have continued to perform together in India.

They also gave an invitation-only performance for the International Indian Film Academy Awards here in June last year. Lewis says over the telephone that he is looking forward to rocking a large crowd at the Esplanade Concert Hall.

"We're both really excited. When we get together, we always have a blast," adds the veteran composer for television and film, who is also known for stints on MTV India's live music performance series Coke Studio.

Kalaa Utsavam has been a calendar staple for the Esplanade ever since the arts centre opened its doors 11 years ago and attracts audiences of between 30,000 and 40,000 a year, according to the venue's programming officer Rajeswari Ramachandran.

"Ultimately, what we hope is for Kalaa Utsavam to bring our Indian community together during Deepavali to celebrate through the arts. And so, we always try to ensure that there is something for everyone in the festival, regardless of their background or interest." Deepavali, the Indian festival of lights, falls on Nov 2.

Dance and musical performances feature talents and styles from various Indian groups, while younger viewers can head to a storytelling session in English by Singapore-based storyteller Kamini Ramachandran on Nov 24 at the Recital Studio.

The underground tunnel leading to the Esplanade will also feature appropriately themed photographs from award-winning photographer Ganesh Ramachandran, capturing the relationship between teacher or guru and shishya (student).

"In recent years, we have also noticed a number of non-Indian audience members who attend the festival and this is heartening as it is proof that the arts can truly transcend cultural differences," Ms Ramachandran says.

As a result, at non-ticketed performances of the Indian dance kathakali, presented at the Outdoor Theatre from Nov 15 to 17 by the dancers of Margi Theatre, there will be English surtitles not just for the dialogue but also the nuances of facial expression and hand gestures.

This year, the programme also puts the spotlight on home-grown groups and younger artists for the first time.

The Esplanade is working with Singapore dance troupe Apsaras Arts on a large-scale production for the first time and Kalaa Utsavam begins with the resulting 60-strong dance-theatre performance, Angkor: An Untold Story, at the Esplanade Theatre. Award-winning Indian bharatanatyam exponent Priyadarsini Govind takes centrestage in this retelling of the romance behind the temples of Cambodia's Angkor Wat complex.

Ms Ramachandran says: "It is encouraging to witness the growth of our arts groups over the years and we believe that Kalaa Utsavam is a good platform for them to realise their dream projects."