The Dirt Radicals returns for a gig here 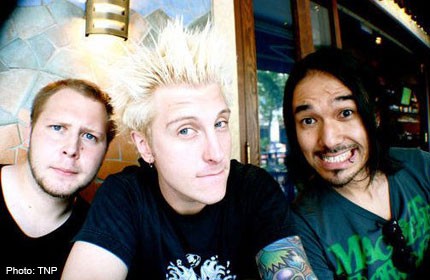 Singapore-based Pug Jelly weren't your typical band on the local scene a decade ago.

The punk rockers, made up of two Australian brothers and a Japanese friend, even received flak for being considered a local band and being nominated Favourite Singapore Artiste at the MTV Asia Awards 2005.

But the band went on to gain a strong following, topping the radio charts here, and earned themselves a distribution deal with Universal Music Singapore.

Then, in 2005, they split, and the members took up various music projects, before finally coming together again and re-naming themselves The Dirt Radicals in 2010.

The trio - comprising bassist-vocalist Sam Cooper, drummer Matt Cooper and guitarist Masashi Kimura - are now based in London and returned to perform in Singapore on Tuesday night, at China One.

They are promoting the band's second album Enter Destroyer, the follow-up to I've Got A Rad Feelin' About This! (2010).

Released last week, the new album pretty much sums up what the band had gone through in the last few years.

For frontman Sam, 28, the primary songwriter, Enter Destroyer is a personal effort that has him talking about his struggles in life.

He told LOUD over the phone from Thailand: "It's about growing up after my parents' divorce, the one girl I wrote Motivation For Getting Up In The Morning for (Pug Jelly's first album), the break-up and how I drank heavily.

"It's about the taste of fame with Pug Jelly and how I became big-headed, then later struggling with being a has-been.

"How I put on 15kg, became bulimic and my struggle with it. It's about living in a place like Singapore with no idea what I wanted to do and how I was left behind."

Meanwhile, Matt, 25, was going through a "quarter-life crisis" and Kimura, 29, was having his own share of relationship troubles.

All that fuelled Enter Destroyer, which helped the members through their individual ordeals. Sam said: "The album was like therapy for us. It took our minds off our problems."

The process of completing Enter Destroyer spanned 1½ years and saw Sam venturing out to the countryside in the UK, Bali and Thailand to seek inspiration for the songs.

It was important for them that this album was done at their own pace.

"I didn't want to rush the new album. The first record was rushed and we were not 100 per cent happy with it," Sam said.

With the new album, the band felt like it was a "natural progression" in their career.

Sam accepts that the association between Pug Jelly and The Dirt Radicals many years down the road is a natural part of the process.

"Ten years later and people still talk about your songs. It was crazy to be part of the band with my brother and my best friend," Sam said.

Looking ahead, Sam is unsure if there will be a follow-up, although they will be touring the UK, France, Germany, Holland and Italy, starting mid-July.

"I feel like I've done everything that I can do with this band and there are no more goals I can realistically achieve," he said.

"Therefore, this is extremely important to me because I'm not sure if I want to do another after this. I've had to manage so many things that happened and I've met too many horrible people.

"But as dark as it all sounds, I am extremely excited to be with the band. I really think this album is the best one we've done."

FYI WHAT: The Dirt Radicals live in Singapore WHERE: China One, Clarke Quay WHEN: Tonight, 8pm TICKETS: $20 at the door. Admission for those 18 and above only