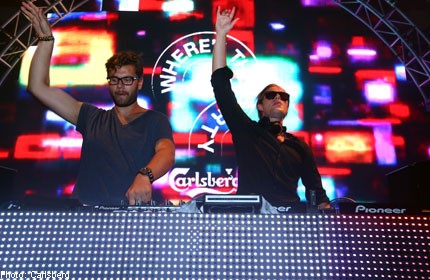 Swedish DJ duo Cazette Alexander Bjorklund (left) and Sebastian Furrer at a club performance. The two have been making waves since in the electronic dance music scene since 2011, when their official remix of Avicii's Sweet Dreams was released.

SINGAPORE - First it was Avicii, the Swedish wonder boy. Will his fellow countrymen, DJ duo Cazzette, be the next to take the clubbing world by storm?

It certainly looks that way.

"We're just having the time of our lives now, but it's so surreal that we're getting so much attention right now," 20-year-old Sebastian Furrer, one half of the duo, told LOUD in an interview in Kuala Lumpur earlier this month.

They were there to perform as headliners for the annual Carlsberg Where's The Party? event.

Cazzette, consisting of Furrer and 24-year-old Alexander Bjorklund, have been on the rise since making their stamp on the electronic dance music (EDM) scene in 2011, with their official remix of Avicii's Sweet Dreams.

They are the newest project of Ash Pournouri's label At Night Management, the mastermind behind Avicii, who was ranked No. 3 in the world last year by DJ Magazine.

Furrer began producing techno music when he was just 15. He had found Bjorklund on MySpace, listened to his music and messaged him about how good he was.

Bjorklund replied, saying that house music was the next big thing and gave him tips on how he could improve.

After a while, they stopped talking, but reconnected two years later, after Furrer had brushed up on his skills.

Bjorklund said: "As it turns out, he had become really good."

Furrer added:"And this was when we decided to make music together."

Their big break came late one night in 2011 when Furrer was watching videos of Avicii on television.

Furrer said: "Avicii mentioned how crucial his manager Ash (Pournouri) was to his success and I knew I had to check this guy out.

After all, look at how far he has come in such a short time."

He contacted Pournouri and the rest, as they say, was history.

Other EDM stars have been quick to heap praises on Cazzette, who have supported acts like David Guetta and Swedish House Mafia.

"It's one thing touring with them, but for them to tell us that we're great and then play our remixes on their shows is just beyond insane. And very surreal," said Bjorklund.

Last year was a big year for Cazzette. They released their debut album Eject and their track Beam Me Up (Kill Mode) made its way around the clubs worldwide.

The duo have played at many festivals, including Tomorrowland and EDC Las Vegas.

They even performed here at Zouk for a night last year.

Said Furrer: "Just seeing all kinds of crowds has been amazing. Even though we didn't get to see much of Singapore during our time here, we got a feel of how fun and exciting it was based on the crowd at Zouk."

Having travelled the world together, the pair have clearly become close, sometimes completing each other's sentences and sharing inside jokes.

Yet, they work apart at all times.

"Back when we were in Sweden, we lived 45 minutes away from each other, so we would send our stuff to each other back and forth online," said Furrer.