Action superstar Donnie Yen will be starring in the upcoming Mulan, the live-action reboot of Disney’s 1998 classic animated feature of the same name.

No, he won’t be playing the hero and love interest Captain Li Shang nor the villain Shan Yu. And no, he’s not Mushu the tiny dragon either.

Instead, it looks like he will be playing a new character created for the movie – Commander Tung, a mentor and teacher to Mulan, who will be played by Chinese actress Liu Yifei. 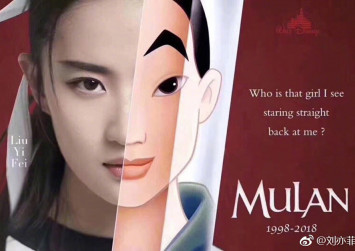 Directed by Niki Caro (Whale Rider, The Zookeeper’s Wife), Mulan has been slated for release on March 27, 2020.  It is the latest in a series of live-action reboots of Disney classics, following Maleficent, Cinderella, The Jungle Book, Beauty And The Beast and next year’s Dumbo.

The 1998 animated version of Mulan was based on the Chinese legend of Hua Mulan, a woman who disguised herself as a man in order to take her father’s place in the Chinese army. The movie featured the voices of Ming Na-Wen, Eddie Murphy, Miguel Ferrer and B. D. Wong.

Yen is currently in the process of filming Ip Man 4, one of four movies that he will be involved in this year. The others are Big Brother, Enter The Fat Dragon, and Crossfire.

This won’t be the first time Yen is starring in a major Disney film, of course – Yen played the blind monk Chirrut Imwe in 2016’s Rogue One: A Star Wars Story. At the time, the big question was whether Yen would be a Jedi (he wasn’t). Now, the biggest question is… will he be singing I’ll Make A Man Out Of You in Mulan?