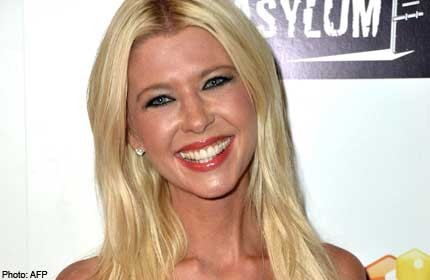 UNITED STATES - Forget summer blockbusters. One of the biggest surprise hits of the year has been a ridiculous low-budget made-for-TV movie called Sharknado. That's shark, as in shark and nado as in tornado, which is how the sharks in the movie travel from ocean to land, biting through furniture, buildings and people along the way.

Never mind your questions about how these predators stay alive long enough out of water to be a menace to society.

Sharknado star Tara Reid says you can't take anything that happens in the cult film - which already has a sequel lined up - seriously.

"When people actually take this movie seriously, it's funny," the 37-year-old US actress, best known for playing blonde bombshell Vicky in the 1999 raunchy teen comedy American Pie and its sequels, told The New Paper over the phone from her home in Los Angeles on Friday.

"I mean, we're not going for an Academy Award here."

Sharknado, produced by the same folks who've given the world other "mockbusters" like Mega Shark versus Giant Octopus and Mega Shark versus Crocosaurus, trended on Twitter for three days when it premiered on cable channel Syfy in the US last month.

In the movie, Los Angeles is hit by a freak storm so strong that it picks up sharks from the ocean and deposits them around the city.

Reid plays April, a mother of two and the estranged wife of the hero - who is probably not coincidentally named Fin - played by 1990s TV drama Beverly Hills 90210 star Ian Ziering.

When she first received the script, Reid said she "couldn't believe what she was reading".

That same night, she went to dinner with friends and told them about it - and it was their reaction that encouraged her to sign on to Sharknado. "I was telling them this story about sharks flying in the sky and biting people in their stomachs," said Reid. "They told me, 'You should do it, just for us, it'll be so funny'."

Shooting the film turned out to be just as hilarious.

"People ask, 'Were you afraid of the sharks?', but there weren't any sharks there," she said. "(The actors) were all looking at different areas, screaming... but there was nothing there.

"Then when you watch the movie and you see where they put the sharks, it's hilarious because nothing matches."

Success was never on anyone's mind. Reid wasn't even in town when Sharknado premiered on the small screen.

While in Mexico with her boyfriend Erez Eisen, one half of Israeli electronic duo Infected Mushroom, she started getting calls and messages about how the show was blowing up all over Twitter.

Apparently, the Twitterverse was inundated with 5,000 Sharknado-related tweets a minute during the telecast, and even celebrities chimed in.

Tweeting to The Hunger Games actress Elizabeth Banks, US actress Olivia Wilde wrote: "Banks, this is our chance to play Siamese twins: Two heads, one magnificent shark tail. Emmys all around. #SharknadoTwo".

The movie went on to be the Syfy's second-biggest movie premiere ever, after 2011's Swamp Shark, with 1.4 million viewers tuning in.

Last week, the US$2 million (S$2.5 million) production even got its own one-night-only theatrical release, though apparently only some of the 200 cinemas it played at sold out.

Asked to expound on why she thought Sharknado had become such a pop culture phenomenon, Reid said: "I think we're going through difficult times, so many people are stressed.

"When you can see a movie for free, basically, where sharks are flying through the air, and nothing makes sense...

"My kids (in the movie) look the same age as me, it's ridiculous! I think that's why people got to enjoy themselves."

Cast member Chuck Hittinger, who plays her adult son Matt in Sharknado, is 30 this year while Aubrey Peeples as her daughter looks like she's in her 20s.

However, if there's one thing threatening to steal Sharknado's thunder, it's Reid herself. Earlier this week, a clip of her explaining what sounded like misinformed research into whale sharks on a US TV show went viral.

She clarified that statement later in the show and again over the phone - "I know a whale is a mammal and a shark is an animal and they can't have sex" - and was a little upset that she'd been made to look like a bimbo.

"I think people tend to do that a lot with me, try to make me sound stupid, try to make me look like something that I'm not," said Reid, who's made a career out of red carpet gaffes and tabloid tales.

She's infamous for a 2004 nip slip on the red carpet for Sean "P Diddy" Combs' 35th birthday in New York, and a botched liposuction that resulted in an oddly-wrinkled stomach.

In 2011, she admitted that her highly-publicised "marriage" to Bulgarian financier Zachary Kehayov had not actually been finalised.

The couple later broke up, after she reportedly felt that Kehayov wanted to marry her for a green card.

For the moment, Reid - who's starred in fluffs like Urban Legend (1998), Josie And The Pussycats (2001) and Van Wilder (2002) - is not exactly aching to make a career out of more films like Sharknado.

Though she's willing to appear in the sequel - announced on Friday to be titled Sharknado: The Second One - she said she's "open to all kinds of roles".

She is currently working on her next film, Tie The Knot, in which Reid's character goes on what she calls an "Eat, Pray, Love-style" trip to find herself and ends up in India.

"It's more of a Bollywood movie," she said. "We're not running from anything make believe in this movie."