Meet the strangest, most lovable bunch of misfit superheroes there ever were.

Let me make one thing very clear: comicbooks are weird.

Death is a mild inconvenience. Superman is allergic to a green rock. Hal Jordan’s magical green ring has to be charged like a mobile phone. Batman fights a supervillain whose sole power is that he has a kite strapped to his back.

I could go on and on, and still have enough material for a hundred Robot Chicken skits.

When I say that Doom Patrol is weirder than everything I just mentioned by a quarter mile, I mean it. What’s even weirder is just how much it can get away with while remaining so full of heart.

This is a series about a group of strange, broken people with incredibly bizarre superpowers - who somehow always get tasked with saving the world, despite being the least equipped heroes to do so.

Season 1 ended with a world-shattering revelation that would change the Doom Patrol forever. Season 2 picks up right where the first left off… with the entire team shrunk to the size of ants. 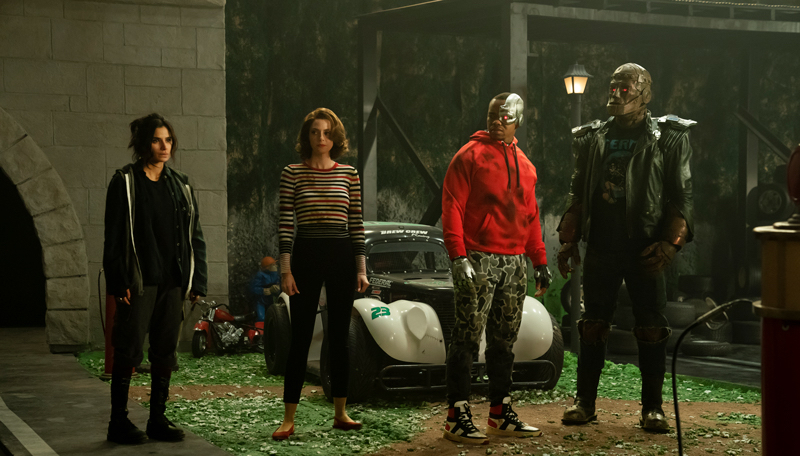 Robotman was once a NASCAR driver of fame, who tragically lost his entire family in a terrible car accident. His brain was then transplanted into a robot body, giving him immense strength and no small amount of existential crises.

‘Crazy’ Jane is a young woman with dissociative personality disorder, developed after childhood trauma. The multiple identities within herself each possess different powers and abilities. 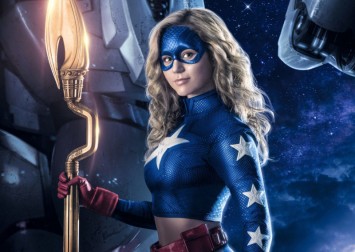 Rita Farr was once a famous Hollywood actress, whose body underwent huge changes after being exposed to a toxic gas. She can change her body shape - but often can’t control what that shape ends up being.

Larry Trainor on the other hand, was a former Air Force pilot who ended up horribly disfigured after making contact with an alien spirit during a flight. He now dresses head to toe in bandages to prevent his radioactivity from spreading, and plays host to the spirit residing within him.

Rounding out this motley crew is Cyborg, whom most DC fans will probably recognise as a member of the Justice League.

At this point, he’s a lot younger, less experienced and reeling from an accident that tore apart his body and killed his mother.

As you might have noticed by now, all of these would-be heroes are tied together by one fundamental aspect of their past: tragedy. 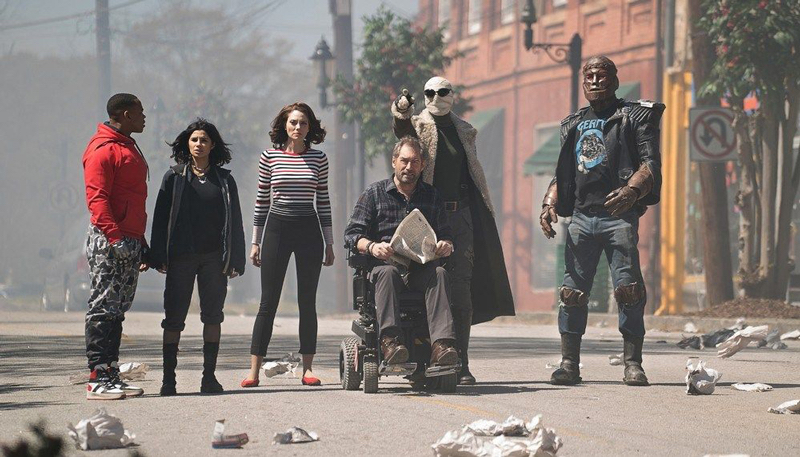 A medical doctor referred to as 'The Chief' swooped in and took each of them under his wing, at the very worst moments of their lives. He allowed them to live in his mansion Doom Manor, while he strived to find a cure for their afflictions.

The Season 1 finale however, revealed his more insidious actions: the Chief had deliberately orchestrated the events that gave the Doom Patrol their powers… and ruined their lives.

The group learned he did this to extend his own life, so that he may take care of his daughter Dorothy - a not-so-young girl with extraordinary powers.

And that’s not even mentioning Animal-Vegetable-Mineral-Man, a rat named Admiral Whiskers, a living street named Danny, the man of muscle mystery Flex Mentallo and more! Phew. 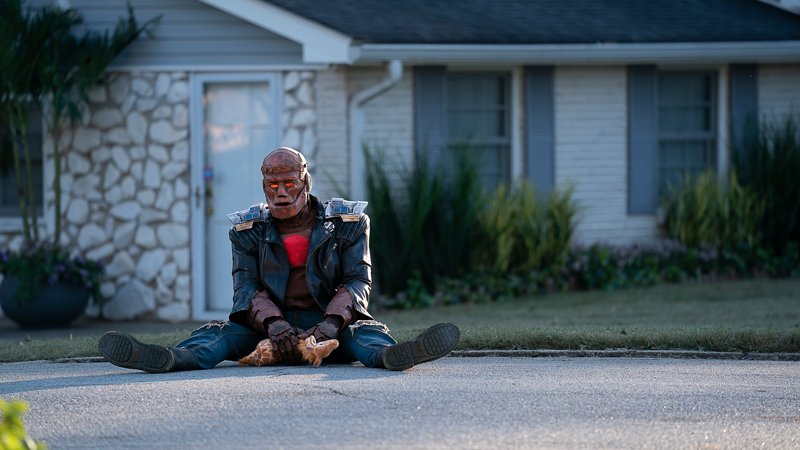 In a horrifying flashback, we learn that her imaginary friends become all too real when needed, after they murder an entire circus full of people to protect her.

She can’t fully control when they decide to show up for a killer good time, so the Chief kept her locked away for decades while he worked on achieving everlasting life. 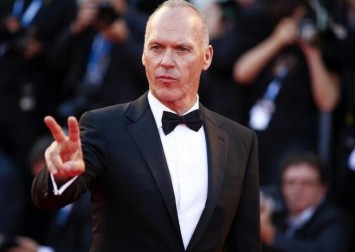 None of that has worked out, we learn. The Doom Patrol are still the size of Tic Tacs, stuck with the person who ruined their lives in a model playset - and his dangerous daughter, too.

Tension in the manor is at an all time high throughout the season, as each member of the Doom Patrol wrestles with what the Chief has done to them.

Robotman in particular, flies off the handle and punches rats in his downtime, full of rage that he doesn’t know how to deal with.

How do you deal with knowing that a person you live with and love, has forever changed your life for the worse?

No matter how hard they might protest otherwise, the group still has morals, which means they can’t just murder the Chief and leave his daughter fatherless.

They can’t leave him or each other, either. Who else would accept them out there, in the real world? 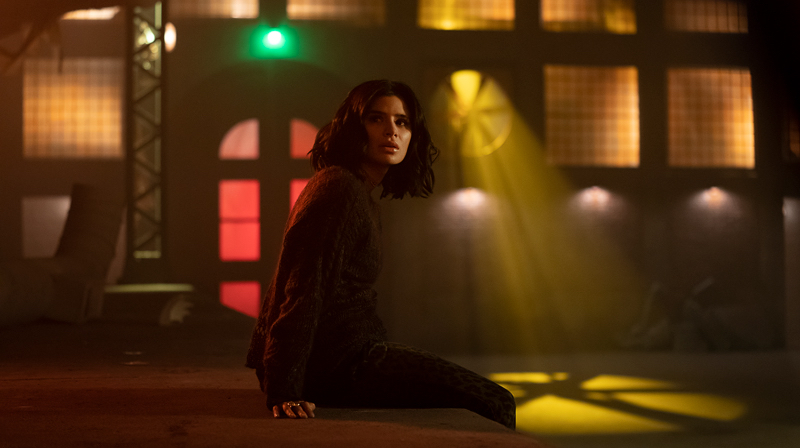 The only thing left to do is to reconnect, and that’s the central theme that drives this season home. Robotman tries his best to reconnect with his still-alive daughter, but finds his ridiculous attempts at doing so rebuffed.

Larry Trainor also finds out that some of his family is still out there - people he hasn’t even seen in years. Rita Farr is the only one out of the bunch who’s willing to set everything aside to take care of the Chief, albeit reluctantly.

Jane is off dealing with her own problems, which is bound to explode badly over the course of this season.

The personalities within her are unsatisfied with her somewhat toxic relationship with the Doom Patrol, and want someone else to step up and be in charge - which leads to her being locked out of her own body.

Poor Dorothy meanwhile, simply struggles to find her place in the Manor, while keeping her psychotic imaginary friends at bay.

Why this show is a must-watch 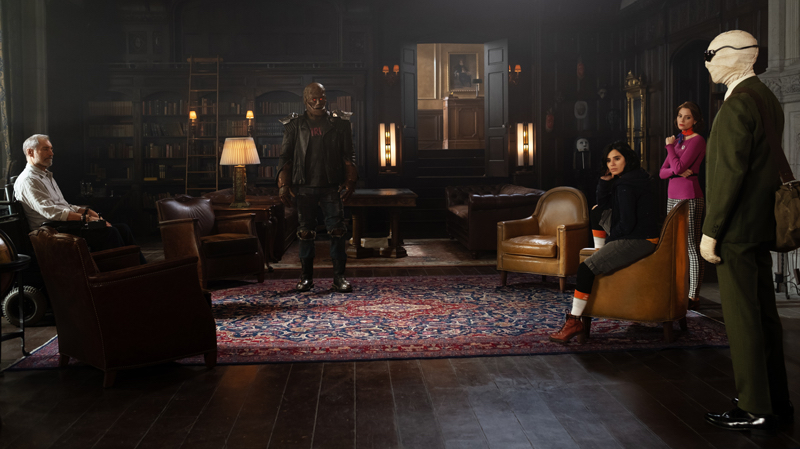 Doom Patrol wears its heart on its sleeve. At its core, it’s really a sentimental drama about broken people trying to build each other back up again.

They’ve suffered their fair share of trauma, and now they’ve found out that the inflictor of that trauma owns the mansion they live in.

It’s really interesting to see how each member of the group deals with that - especially since the first few episodes do away with world-ending stakes and opt for more focused character development instead. 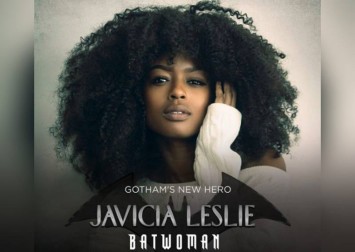 Not even Guardians of the Galaxy managed to portray such a unique band of misfits coming together in such a beautiful way.

Even when the show’s at its weirdest, you’ll always find something to pull at your heartstrings just around the corner.

The eternally broody Larry Trainor is often the center of these moments, as he finally starts to peel back the layers of tragedy he’s experienced and ignored for so long.

Doom Patrol Seasons 1 and 2 can be streamed on HBO GO. New episodes are released every Friday.

For more DC TV goodness, check out our review of Stargirl.