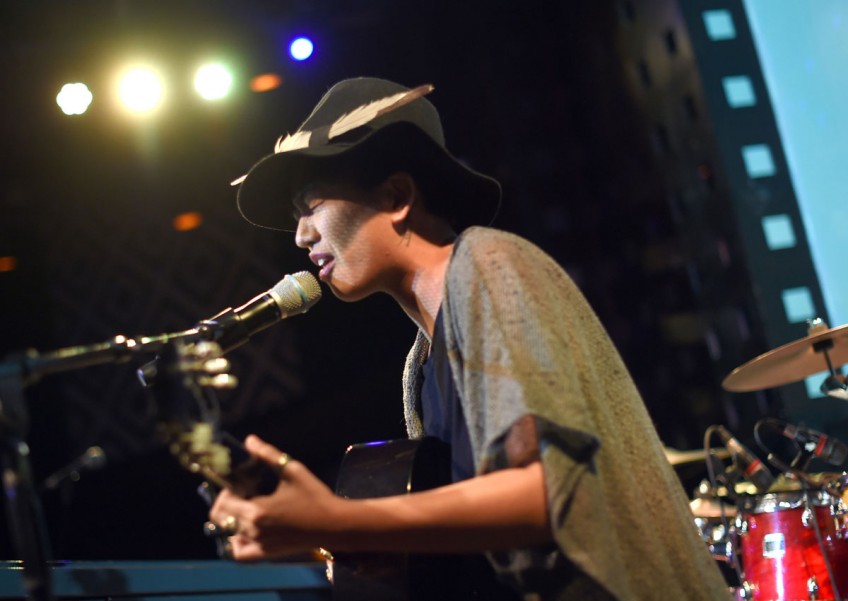 "Several times a week they would be in my dreams. And I didn't understand why. But circumstance allowed me to actually go and physically be with those trees.

"And I can't explain it, but that experience was like a pivot in my path. That's when everything started, that's when it just made sense," the 27-year-old said.

For Treya, who wound up spending a couple of years travelling across the United States, nature has proven to be both a means for self-discovery and a metaphorical backdrop for songs that at root are intensely personal stories of identity.

Treya was among hundreds of artists who performed in clubs across New York last week in the 35th CMJ Music Marathon, an annual gathering for the industry to discover rising talent.

Treya is recording her first studio work in New York and Los Angeles, with plans next year for a stint in Taiwan to tour and collaborate with Mandarin-language artists.

Treya is adept both at guitar and piano but her raw, soulful songs are most driven by her voice, mellifluous with a brassy lilt.

On Still Here, which starts gently and unadorned before an audience-captivating crescendo, Treya sings of a journey through both mountains and gray New York streets, "Asking where, where did I come from? Where, oh where, is my home?"

Treya, raised in New York by adoptive parents, said that her trip to the redwoods taught her to pursue her "gut feeling" - including her desire to discover Taiwan.

Despite her pull to the island, Treya has little musical connection to Taiwan, saying she was more influenced by French artists such as Edith Piaf.

Treya, who said she spent many nights as a teenager watching waves roll onto the beach, studied classical piano for 10 years. Her teacher, she recalled, would "just sit there and huff and puff", leading her to quit at age 16, bereft of any emotional joy from music.

But Treya then picked up the guitar and found the opposite dynamic - compared with piano, she knows little technique behind guitar, but she explained: "It was the first instrument that I had for myself. There was no teacher involved; there was nobody else involved."

While Treya has played frequently around New York, she rarely invites friends to see her, saying she still feels an insecurity.

"Especially in New York, there is so much going on at all times.

"I'm not good at rejection, so I would rather just not tell people and surprise whoever winds up being in the room," she said. "People lack surprises these days. It's fun to be part of that."

With the CMJ Music Marathon credited with providing a springboard for stars ranging from Lady Gaga and REM, many countries, often with support from their embassies, use the occasion to bring out their rising talent.

Treya performed at a Taiwanese showcase along with Soft Lipa, one of the island's prominent rappers, and Boxing, a reggae-influenced band of ex-boxers from aboriginal heritage.

Among the better-known artists to perform at the CMJ Music Marathon was John Grant, the 47-year-old Denver alternative rocker who has enjoyed a career resurgence as a solo artist based in Iceland.

Grant, who performed before an enthusiastic crowd Saturday at Greenwich Village club (Le) Poisson Rouge, glided in style from piano faux-ballads to funk, a breadth that - combined with his hearty sense of irony - bring to mind a gay version of Beck.

Grant recently released his third solo album, Grey Tickles, Black Pressure, whose title song opens with a line he delivers in a startling deadpan: "I did not think I was the one being addressed / In hemorrhoid commercials on the TV set."

On Global Warming, Grant groans with mock gravity that the sun is "ruining my fair complexion" but rejoiced on how it makes skateboarding boys strip down.

Grant offered the crowd a tongue-in-cheek apology for his self-indulgence but, showing the literary bent behind his appeal, was rewarded with laughter and cheers.