An evening with Mr Terminator 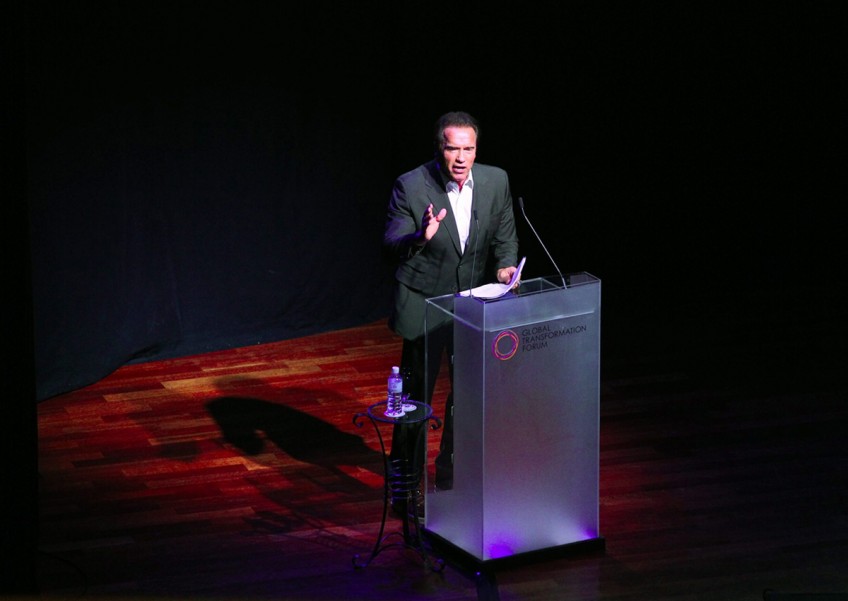 While the superstar and former governor advised his listeners to always think big and be positive, he reminded them to do one more thing - give back to society.

ARNOLD SCHWARZENEGGER is larger than life - he is, after all, "The Terminator". That's in the movies, of course.

In real life, the Hollywood action actor looks much shorter than he does on the big screen although he stands at 6ft 2in. But he certainly has the muscles.

He is now 68 but looks younger. Either he has been eating healthy, living as a full-time vegetarian, or he has a good surgeon in Los Angeles.

The former California governor doesn't walk around with bodyguards, and we can assume that no one is going to mess around with him. He is usually accompanied by an aide who knows he should not be his shadow.

At a dinner in Nobu, a top restaurant in Kuala Lumpur on Thursday night, he was one of the earliest guests to show up, despite his superstar stature.

It was certainly my lucky night as I was the only media person invited to the star-studded affair where everyone was in a casual mood.

As an early bird, I was privileged to have the extra time to talk to the actor-turned-politician-turned-actor before dinner began.

He spoke in his thick Austrian accent, as we are familiar with, and he certainly knew his facts. He has done his homework before arriving in Kuala Lumpur.

He was curious as to how an English media group, especially the print side, could function in a multi-ethnic country.

"You have 30 million people. How does your newspaper survive in this fragmented country?" he asked me. Before I could reply, he noted, "Well, I notice everyone I meet here can speak English."

Then he patiently listened to my explanation, posing more questions on the ethnic composition and the languages in this country.

He was especially keen when I told him that we actually have an edutainment company that provides exhibition services of characters from comic book giant Marvel.

Star-owned Victoria Hill holds the rights to operate, market and promote the Marvel exhibits for display in museums and science centres or other similar venues. It is currently in New York and Seoul recently. Iconic Marvel characters include the Hulk, Thor, Iron Man and Captain America, which were popularised in the movie The Avengers.

Like a true-blue businessman, which he is, he wanted to know the business model and more importantly, the impact on Asia.

The conversation eventually turned to the haze - which was pretty visible from the 56th floor of the Petronas Towers in KLCC.

He is, of course, a little disappointed, saying he had read about the greenery, rolling hills and sandy beaches with crystal clear waters in many books about our country.

"I want to see all that but I am here for just less than 48 hours! I want to be back!" he said, using his famous catchphrase for impact. It was also his first trip to South-East Asia!

As more guests turned up, he patiently obliged every request for pictures. Even the other personalities and the big tycoons at the dinner could not hide their excitement, taking out their handphones for the rare opportunity.

On Friday, when he spoke to a packed hall at the KL Convention Centre, he was clearly a winner as his listeners, who paid over RM1,000 each for the two-day forum, gave him a standing ovation after he ended his presentation.

He had a piece of advice - terminate the naysayers, saying when he first started his career, there were movie agents who told him he could never be a leading actor because of his accent.

In fact, Schwarzenegger pointed out that according to director James Cameron, science fiction thriller The Terminator would not have been successful if he had not "talked like a machine".

To improve himself, he took up English and went to acting and speaking classes and eventually earned praises from film directors for turning his liabilities into his greatest assets.

Schwarzenegger, in his book, Total Recall: My Unbelievably True Life Story, has said that "You have to remember something: Everybody pities the weak; jealousy you have to earn" and "What is the point of being on this Earth if you are going to be like everyone else?"

Urging his listeners to think big and be positive, he said: "The difference between a winner and a loser is that winners, when they fail and fall, they get up. They dust themselves off and march on. Don't be afraid to fail."

And there's one more golden rule which he shared - always remember to give back to society.

Tracing his career transformation from being an actor to a two-term governor, Schwarzenegger said when he decided to leave his movie career in 2003 to be governor of California, he had refused to accept a salary.

"I made absolutely no money. But I tell you, it was so fantastic to do these two terms of governor. Those seven years were the most exciting and rewarding - to get up in the morning and do work every day and serve 38 million people, to make a difference," he said.

Before the night at Nobu came to an end, I boldly walked over to Prime Minister Datuk Seri Najib Tun Razak, who was seated together with his A-list guests, which included three former prime ministers and Olympic legend Carl Lewis.

I politely asked for a group photograph of the entire table and after that - one which included myself.

All sportingly obliged - and even former Singapore PM Goh Chok Tong tugged my sleeve and said, "make sure I get a copy of this picture."

Well, if you never ask, you will never get. Arnold has certainly lifted the morale of his listeners over the past two days, challenging us to dream and think big but also reminding us to work hard to make it happen.

We hope he will be back to Malaysia, as he has promised. Hasta La Vista, see you again.