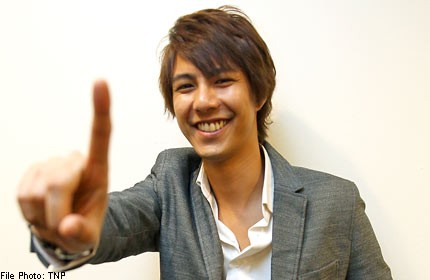 Shaun Jansen, finalist of the reality singing competition The Final 1.

SINGAPORE - Had it not been for his ex-girlfriend, we may have never got to see Shaun Jansen battle for the top prize of Channel 5's reality singing competition The Final 1.

Said the 28-year-old self-proclaimed "bum": "I wasn't very ambitious. I just thought I was going to grow up and play music in a bar."

The marketing communications executive at a carpet tile manufacturing company said: "My exgirlfriend was a go-getter and she needed to be with someone who could push her on."

The relationship ended four years ago and Jansen has remained single since.

When asked how many ex-girlfriends he had, he said he could count them "on the fingers of one hand".

"After the break-up and through time, I felt like I was meant for something greater," he said.

"That experience with her changed me and I started thinking that I should be more ambitious."

But The Final 1 is his first step towards a career as a solo performer.

"That episode with my ex-girlfriend opened my eyes, but I would say (joining The Final 1) was the turning point in my life," said the Eurasian rocker, who goes up against 19-year-old soul singer Farisha Ishak for the top prize.

The finale will be held at 8pm next Wednesday at The Star Performing Arts Centre. The showdown will also be aired live on Channel 5.

The competition judges have advised him to leave rock for pop - something he has mixed feelings about.

"One week, (judge) Ken Lim picked for me the song Forever And Always by US pop-rock band Parachute," Jansen said.

"I couldn't sing it the way he wanted - like how New Zealand-born singer Daniel Bedingfield sounded in If You're Not The One.

But just how rock 'n' roll is Jansen? Especially with his squeaky-clean, good guy persona on TV.

For one, he launched himself into the crowd at a New Year's Eve gig at *Scape last year and he tore off his shirt at another show.

"I like having two personas - one on stage where I can go wild and one off-stage where I'm proper and decent," he explained.

As much as he wants to, his crazier side has to be tamed on a family-friendly show like The Final 1.

If he had his way, he would prefer The Final 1 live studio audience at the MediaCorp TV Theatre standing moshpit-style instead of seated.

So will we get a glimpse of him topless at the finale then?

"Maybe some day, but not right now because I haven't gone to the gym in a very long time," he laughed..