Explore the arts with Miss Julie 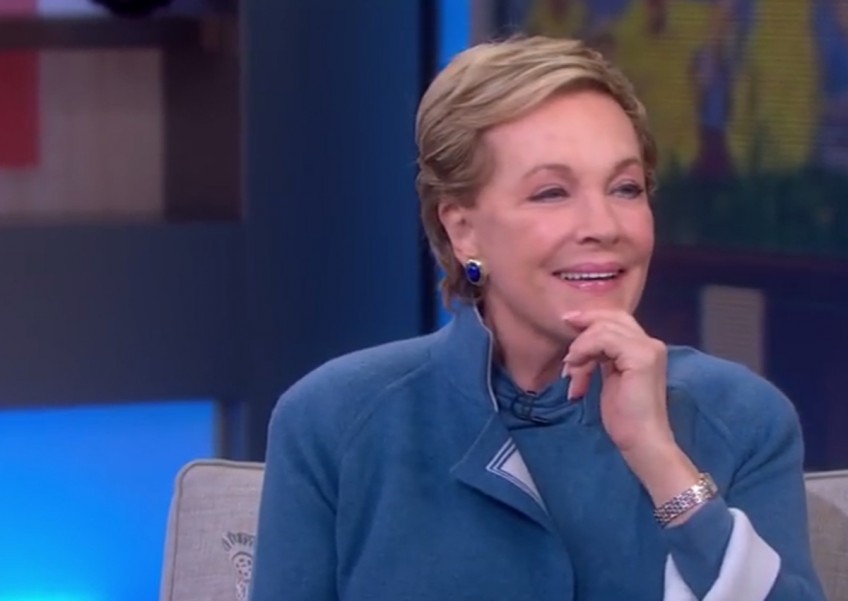 Julie Andrews is already a cultural icon for those generations raised on repeat viewings of The Sound Of Music (1965) and Mary Poppins (1964), her most beloved movies.

And now the English actress and singer has a chance to reach a whole new demographic with a television series for pre-schoolers, Julie's Greenroom, that debuts on Netflix today.

Created by the 81-year-old and her daughter, Emma Walton Hamilton, 54, it stars Andrews as Miss Julie, a woman running a theatre programme for children to explore the performing arts.

Her students are played by puppets designed by The Jim Henson Company, the creators of the Muppets.

In 13 half-hour episodes, these children, or "Greenies" as they are called, will explore various careers in the arts under the tutelage of Andrews and guest stars such as performers Idina Menzel, Alec Baldwin, Josh Groban and Ellie Kemper.

Speaking to reporters in New York last month, Andrews says she and her daughter have "long wanted to do a programme to convey the joy of the arts to children and families", especially given the shrinking budgets for arts education in the United States and other countries.

Arts education "is where my heart is", says Andrews, whose long list of career accolades includes an Oscar, Golden Globe and Grammy for Mary Poppins and another Golden Globe for The Sound Of Music.

She and Walton Hamilton - her daughter with her first husband, Tony Walton, an 82-year-old retired set designer - are also firm believers in the inclusivity of the arts and their power as a social equaliser.

Andrews points to her own background to illustrate this.

"It was very ordinary and rough, and we were very poor," she tells The Straits Times.

"It was the school of life for me - I learnt on the job.

"My mother and stepfather were in vaudeville and musicals, so the education I got was watching from the side of the stage all these phenomenal acts and performing in a different town every week," says the actress, who has two other daughters aged 42 and 43, adopted from Vietnam with her second husband, the late film-maker, Blake Edwards.

"That's what I did around Britain for years. And what I was learning when I was myself appearing on stage as a young girl was how to deal with all kinds of audiences - people who are drinking too much or throwing bottles at one another on a Saturday night - and being in different digs and travelling a lot," says Andrews, who went on to become a successful stage actress before playing a singing nanny in Mary Poppins.

Her daughter observes that good arts programmes in schools are "less and less available to kids these days and one reason we wanted to do this show is because we are really worried about the fact that the arts budgets are the first to be cut in schools".

"And yet we know there is no better way for kids to learn critical-thinking, problem-solving and communication skills, and empathy and tolerance," says Walton Hamilton, who has co-authored a series of children's books with her mother.

She also believes the arts "level the playing field in a way that almost nothing else does - the arts really do break boundaries and barriers and you don't have to be from a certain cultural or socio-economic background".

This is why she and Andrews insisted that the Greenies Miss Julie teaches be a diverse group.

Walton Hamilton says: "We very intentionally wanted them to be very culturally diverse, so there's a lot of different backgrounds and cultures represented."

In addition, one of the students is in a wheelchair, while another is a theatre-loving duck - an idea Andrews came up with herself "because, you know, the arts never discriminate", the actress says with a smile.

The programme will illustrate how the arts can accommodate different skill sets too.

Walton Hamilton says: "Each of the students is discovering his strength. They might not be great singers, but they can write or they can make a confetti cannon.

"One of the kids who comes in is a techie and she finds herself through backstage work."

As with children's programmes such as Sesame Street or The Muppet Show, Julie's Greenroom can be enjoyed by the entire family despite its pre-school focus, with references and humour that adults "will get on a slightly different level than the child", says Andrews.

Another reason the mother-and- daughter team want to bolster the arts is the current political climate, which they feel is rather hostile to artists and arts education.

"It is politics, unfortunately," Andrews says, while Walton Hamilton observes that those in power are often suspicious of artists because "good art sometimes can be subversive and good art makes us think and question our values and leads to dialogue".

Walton Hamilton adds: "And I think there is a certain movement right now to not want people to ask questions or challenge or think too much.

"If you look at the degree to which, say, actress Melissa McCarthy playing Sean Spicer (on the comedy sketch show Saturday Night Live) has rattled the cage, I think that's fantastic, but, of course, it is threatening to the people in power.

"And I think that's why, over the years, it's really the arts and the artists who have advanced us as a civilisation and as a society."