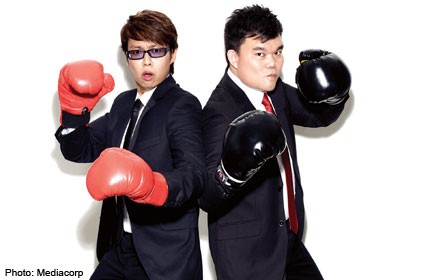 SINGAPORE - It may have started with a "kiss".

Last Friday, MediaCorp announced that DJ The Flying Dutchman (FD) would be leaving radio station Class 95FM's The Morning Express after having hosted the show for the last 10 years with co-presenter Glenn Ong.

FD, whose real name is Mark van Cuylenburg, will make a direct swop with Joe Augustin, who currently hosts The Gold Breakfast Show on Gold 90.5FM with Vernetta Lopez.

Lopez had worked on The Morning Express for three years, until she moved to The Gold Breakfast Show earlier this year.

Fans of The Morning Express, who are unhappy with the new pairing of Ong and Augustin - who have been open about their mutual animosity - are questioning the splitting up of the Ong and FD pairing, as the duo's effortless chemistry has been a hit with listeners.

Some lamented on Class 95FM's Facebook page that their mornings will from now on be "blue", while others have proclaimed that The Morning Express will lose its appeal after the changes take place on Aug 20.

DJs from Singapore Press Holdings stations Kiss 92FM and Hot 91.3FM have also weighed in on the changes with tongue firmly in cheek.

"So I think the MediaCorp radio stations had to do something to rejuvenate their shows in the face of their newfound competition.

"But seeing as how Glenn and Joe are two stubborn rocks who don't like each other, I think their pairing will be a novelty at first. But the tension will wear them out eventually."

According to the latest Nielsen Radio Diary Survey, around 419,000 listeners tuned in per week to Kiss 92FM between March 25 and May 19, up from 151,000 in the months following its launch last September.

DJ Maddy Barber, 38, who hosts Kiss 92FM's Morning Drive Time show alongside Jason Johnson and Arnold Gay, agreed: "It's pretty obvious these drastic changes were made to keep Kiss 92FM at bay, which only validates our position and strength as a worthy rival.

"So we'll keep doing what we do best while they play musical chairs."

When contacted, the MediaCorp spokesman denied that the changes were made as a response to Kiss 92FM nipping at their heels.

She said: "Glenn's gotten way too comfortable in the mornings, and needs someone like Joe to challenge him intellectually.

"FD's listeners have grown older but dare not admit that they want to listen to Gold."

Regarding the negative feedback from listeners, she said: "People have habits... and get angry when they are forced to break it... A strong reaction to the changes was expected."

The radio ratings survey is done twice a year for an eight-week period each.

This year, it was done between March to May, with the second one coming up next month.

The results of the next survey will be revealed on Nov 28 (radio station rankings) and Dec 3 (ratings for the individual shows).

Said Mr Jamie Meldrum, senior programme director at Hot 91.3FM: "Was the swopping of hosts for their breakfast shows because our stations did well in the survey? Definitely! It'll be interesting to see, at the end of the year, whether their strategy worked (and their ratings get boosted)."