'The Fifth Estate': The film that outraged Assange 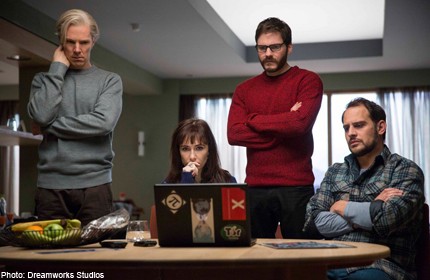 LONDON - "The Fifth Estate", recounting how WikiLeaks rocked the US administration, has its worldwide release in Britain on Friday, but the website's creator Julian Assange has slammed the film as "cowardly".

Prime Minister David Cameron praised the performance of Benedict Cumberbatch, who plays Assange complete with platinum-blonde hair, but the British actor was on the end of a stinging rebuke from the man he portrays.

"I believe you are a good person, but I do not believe that this film is a good film," Assange said, according to an email released by WikiLeaks.

"It is a work of political opportunism, influence, revenge and, above all, cowardice.

"It seeks to ride on the back of our work, our reputation and our struggles."

In an email sent to AFP from the Ecuadorian embassy in London, where Assange is holed up in a bid to avoid extradition to Sweden to face sex-abuse claims, the former hacker blasted the film as "a geriatric snoozefest that only the US government could love".

The Australian-born activist has been holed up in the embassy since June last year, claiming he was afraid of eventually being deported to the US over the publication of hundreds of thousands of military and diplomatic documents on his website.

Cumberbatch, a rising star in Hollywood, recently expressed concern over the film's script, telling Vogue magazine he was worried that it was "setting (Assange) up as this anti-social megalomaniac."

"The Fifth Estate" follows the WikiLeaks story between 2007 and 2010, from the publication of "War Logs", which revealed abuses by the US military in Iraq and Afghanistan and through "Cablegate", the massive release of US diplomatic memos which embarrassed governments around the world.

The film is inspired by the autobiography of Daniel Domscheit-Berg, a German activist who was WikiLeaks spokesman until his acrimonious departure in 2010. He is played by Spanish-born German actor Daniel Bruehl.

The Assange camp argues that this renders the film unreliable as Domscheit-Berg has been engaged in a "personal and legal" battle with WikiLeaks since his exit.

Assange dismissed the German as a minor player - and claimed the filmmakers had lost sight of the "true" WikiLeaks story.

"Instead of the exciting true story, we get a film about a bland German IT worker who wasn't even there," Assange wrote to AFP.

"People love the true WikiLeaks story: a small group of dedicated journalists and tech activists who take on corruption and state criminality against the odds," he added. "But this film isn't about that."

Assange was not consulted during the project and his only contact with the film's crew was the Internet exchange with Cumberbatch, in which he urged the actor to pull out.

"I believe that you should reconsider your involvement in this enterprise," he wrote.

"You will be used, as a hired gun, to assume the appearance of the truth in order to assassinate it. To create a work, not of fiction, but of debased truth.

"Not because you want to, of course you don't, but because, in the end, you are a jobbing actor who gets paid to follow the script, no matter how debauched," he added.

Speaking at the Toronto Film Festival in September, director Bill Condon suspected that Assange had "identified us very early as a hostile project."

His suspicions were confirmed twelve days later when WikiLeaks posted what it called a "mature version" of the film's script, along with a memo that called the film "irresponsible, counterproductive and harmful."

A source close to Assange said he had made strenuous efforts to obtain a copy of the film, but his requests were rejected by the studio that made the film, Dreamworks.

However, Prime Minister Cameron has been allowed to see the finished product, describing Cumberbatch's performance as "brilliant".

Other critics suggested that the film suffers in comparison to "The Social Network", the feature film about Facebook creator Mark Zuckerberg.

Like Assange, Zuckerberg was also unhappy about the way his life had been portrayed on the big screen.