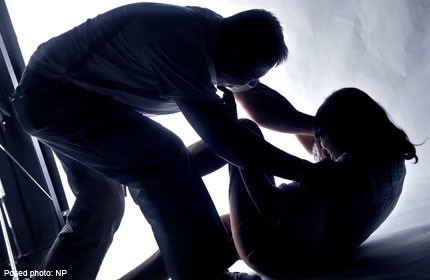 MANILA - Actress Sunshine Cruz has accused her estranged husband, actor Cesar Montano, of subjecting her to physical, psychological and sexual abuse, claiming that on Mother's Day, he went to her house and raped her.

"On or about May 12, 2013, respondent suddenly barged into complainant's residence where she was then alone, and then and there, respondent violently attacked her, employed physical violence and raped the complainant," Cruz said in her complaint which she filed Tuesday in the Quezon City Prosecutor's Office.

Aside from marital rape, she also accused Montano of violating Republic Act 9262, or the Anti-Violence against Women and Children's Act of 2004, saying he had been subjecting her to emotional and physical battery since January this year.

Cruz blamed his manner for the deterioration of their 13-year marriage and further claimed that he took their daughters without her permission last month and has since refused to let her see them.

Sought for comment, Montano's lawyer, Joel Ferrer, said in a text message to the Inquirer that he and his client would reply to the charges once they get a copy of the complaint.

In her nine-page complaint, Cruz described Montano as a "very domineering, philandering husband [who] demanded full submission and obedience from the complainant while he continually [prohibited her] from inquiring [into] his own affairs."

She recalled that every time she asked about his activities, Montano would react with "harsh verbal abuse."

She recalled an incident in February during which she and her three daughters were forced to leave their home because of her husband's "abusive behaviour," thus depriving their children of support, shelter and means of going to school. Cruz also claimed that when she decided to move out of their house, Montano hit her.

"Respondent continued and still continues to harass complainant by threatening her with physical harm, obscene accusations and grave defamation," she said, citing a series of angry text messages that Montano sent her on June 10.

On July 29, Cruz added, Montano fetched their three daughters from school without her permission and brought them to his home. When she asked him to return their children to her, he "deliberately and forcibly refused."

She said in her complaint that her husband's continued custody of their daughters would be prejudicial to their normal growth and development due to his extra-marital relationship with another woman.

The court, however, denied her petition for a TPO while it has yet to resolve the second motion.

The couple separated early this year following reports linking the actor to starlet Krista Miller. Montano, who won acclaim for his portrayal of national hero Jose Rizal, twice ran unsuccessfully for public office, first, for senator in 2007 and Bohol governor in 2010.