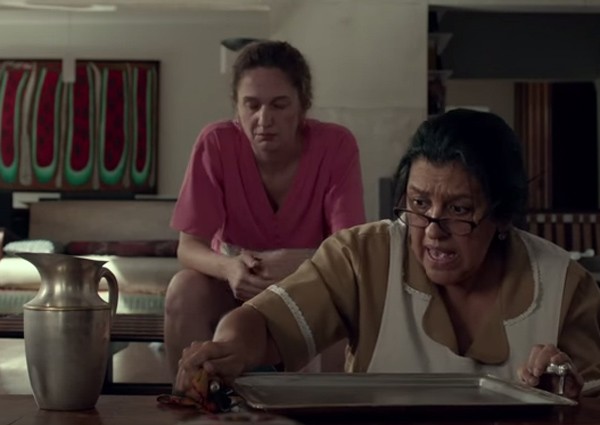 RIO DE JANEIRO - A Brazilian film about a maid in a wealthy home is not only making waves as Brazil's Oscars entry, but stirring painful debate over inequality and racism in a country in crisis.

"Que Horas Ela Volta?", released in English as "The Second Mother," is a long way from the violence-filled depictions of drug gangs, like "City of God," that foreigners have come to expect from Brazil.

But director Anna Muylaert's outwardly quiet movie has hit a raw spot in using a live-in maid's story to bare the hypocrisy behind the idyllic facade of the upper class household where she works.

Released at a time when Brazil is reeling from economic decline, corruption and the crumbling of President Dilma Rousseff's leftist agenda, the film whose title translates as "What Time Will She Come Home?" challenges the biggest country in Latin America to examine its soul.

The film "has all the chances of becoming a milestone in contemporary Brazilian cinema, as 'Central do Brasil' and 'City of God' were in other contexts. It's a film completely in sync with the pulse of the country," critic and blogger Jose Geraldo Couto wrote.

Actress Regina Case has won rave reviews at home and in Hollywood for her portrayal of Val, one of Brazil's largely invisible army of domestic workers.

Living in the tiny servant's room of a luxurious Sao Paulo house, Val not only feeds the family and cleans, but looks after the dog, garden, swimming pool and all but raises the sweet, but spoiled son.

Her employers say she's "practically family." But the film ruthlessly shows how Val in reality is second class and will remain so until - inspired by her estranged daughter's independence - she quits and starts a new life of her own.

"I thought the film was very good, especially the end where the servant finally frees herself and goes off," dos Santos said in an interview. "Things are changing."

There are just over six million domestic workers in Brazil, according to government figures.

By comparison, UN and labour union estimates show the United States, with a population a third bigger than Brazil's, has only 1.8 to 2.6 million domestic workers. The European Union, with more than double Brazil's population, has an estimated 2.5 million such workers, according to the International Labor Organisation.

Servants in Brazil - most of them black women - are so woven into the social fabric that architects design even middle-class apartments with a designated bedroom for the live-in help.

These jobs can be a chance to escape extreme poverty in the outlying regions of the world's seventh biggest economy. But to critics, the domestic service industry also holds back society, reinforcing racism and other legacies of slavery which flourished in Brazil right up to 1888 - two decades later than in the United States.

Dos Santos, who is 62 and started working at 10, said her experience has been bitter-sweet.

"When you're with a family that is educated and good, you benefit too - it's like going to a school. It has a good side," she said.

But maids embedded in rich families, housed in "the very small room with no window," have constantly to remind themselves that the "beautiful house, the swimming pool, the sauna - that is not their reality," she said.

Under Workers' Party president Luiz Inacio Lula da Silva and his successor Rousseff, tens of millions of people have been lifted from poverty in the last decade. And in 2013 constitutional changes finally extended normal rights, like overtime and the minimum wage, to domestic workers.

Given those seismic shifts, some Brazilians wonder how long it will be before the country's long-suffering maids follow fictional Val out the door.

"It's already over," said Francisca Ciambarelli, who was among the well-heeled crowd watching "Que Horas Ela Volta?" in Rio's swanky Leblon neighborhood.

Ciambarelli, a 45-year-old economist, said she has a devoted live-in maid, but that the system is on its last legs. "People don't want to live like that anymore." Just like in the film, Ciambarelli's maid has a child in the process of getting a higher education and moving into another social class where working as a servant would be unthinkable.

"The mother will not change. She will live in our house and die there," Ciambarelli said. "But the son, he is always trying to persuade her to leave."

Dos Santos said eventually the new laws "will change a great deal" in Brazil. "We will end up like France where people are paid by the hour and this working 24 hours a day will end." But Brazil's economic crisis may yet rewrite that script.

The number of people in domestic service fell steadily from around 2008, when the Workers' Party welfare programme was at its most effective. However, this year, with recession eating away at economic opportunity, the numbers have started to climb again.

With salaries for live-in maids in the wealthy parts of Rio de Janeiro reaching around $500 a month, even women from the new generation might think twice about rejecting the opportunity.

The really poor, meanwhile, are unlikely even to see "Que Horas Ela Volta?".

"That's the reality. I saw the film because I was in a seminar," dos Santos said. "Otherwise, I wouldn't have gone."