Flame awards 2014: She hopes to inspire others 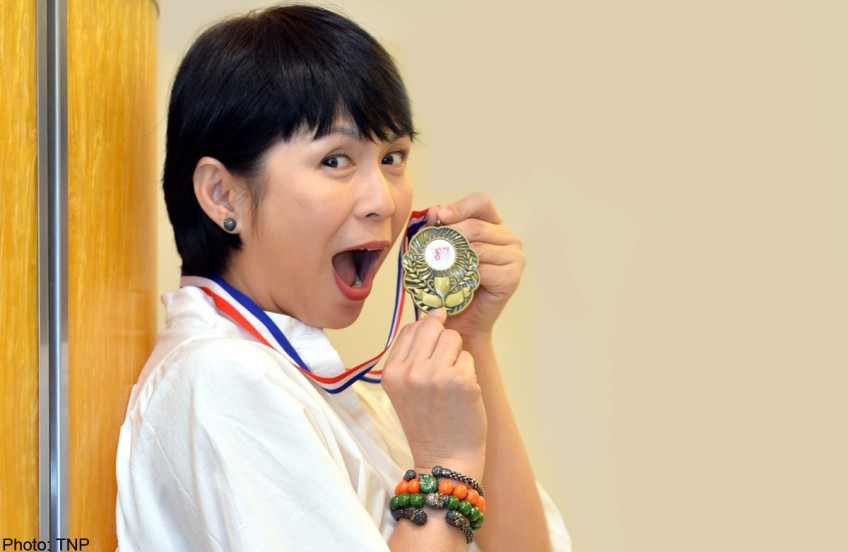 SHOCKER OF THE YEAR

2014 has been a roller-coaster ride for actress Pan Lingling.

Her father died of lung cancer in February.

A month later, the 44-year-old mother of two revealed to the public that she had battled breast cancer in private last year.

Pan, who is now cancer-free, went public with her illness when she released photos of herself with little to no hair to the media during a press conference in April.

Readers felt this was the most shocking celebrity news of the year and cast 190 votes for Pan's story, ahead of Qi Yuwu's and Joanne Peh's secret nuptials (164 votes).

Pan told TNP: "I never expected to win. Maybe the readers have been wondering what happened to me, since I hadn't appeared on TV for quite a while. I honestly thought that Joanne Peh's and Qi Yuwu's wedding news was more shocking. Even I was shocked by it."

Pan hopes that her story will give other cancer patients courage and let them know that they are not alone.

"I appreciate my best friends and family who have supported me throughout. I hope everyone will know that they can overcome all obstacles."

Despite the dark moments in her life this year, there were also happy moments.

She recounted how nervous and excited she was when she met her two biggest idols - football superstar David Beckham and former prime minister Lee Kuan Yew - on the same day, Sept 19.

Pan's best friend had arranged for her to meet Beckham for dinner at a Japanese restaurant when he was in town for some promotional events that month.

Pan bumped into Mr Lee, who was celebrating his birthday at the same restaurant.

Pan said: "Never in my life would I have thought that I would see my two idols in one day at the same place. I told my husband, 'I have no more regrets after seeing them today'.

"This year had been so meaningful and eventful for me and I am ending off the year with this award. I hope to start the new year with a healthy life and to stay pretty and happy."

This article was first published on December 26, 2014.
Get The New Paper for more stories.