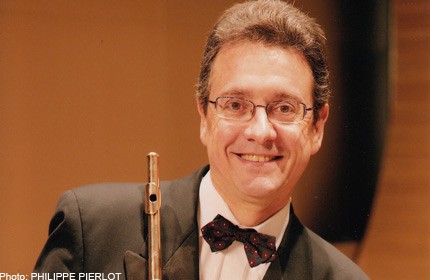 Small and slight, the flute may come across as an unassuming instrument as compared to the piano or violin.

But its profile here has been significantly raised in recent years, thanks to former Singapore Symphony Orchestra flautist and National Music Competition winner Goh Tiong Eng's efforts with the Singapore Flute Festival. He first organised it in 2009 and it is entering its fourth run this year.

The four-day event focuses on solo performances of the flute and includes a series of concerts, workshops and a music competition. It will be held at The Arts House from Friday to Monday.

Mr Goh, 48, says the decision to hold such a festival, the first of its kind here, stemmed from his experiences studying the flute in London and Paris, where he often attended flute festivals.

"I thought Singapore should also have something like this, where young and professional flautists can come together to learn something and perform as well."

The first festival was staged at the Young Musicians' Society Auditorium in Waterloo Street and drew a small but enthusiastic audience numbering close to a hundred. Last year, more than 300 people attended the festival held at the School of the Arts.

He is aiming for this year's festival to be a full-house event drawing a total of 400 participants and audience members. "People are starting to become aware that the flute is also a pretty good instrument," he says.

Mr Goh, who is divorced with two children, describes the tone and sound quality of the flute as one that is similar to the human voice since it possesses vibrato. "I just love the flute. It's a calling," he says with a laugh.

The festival features an international guest performer every year. This year, he has invited renowned French flautist Philipe Pierlot, with whom he studied at the Conservatoire National de Region de Rueil-Malmaison in Paris in the 1980s under a French government scholarship.

Pierlot has produced more than a dozen CDs as a soloist and performed at international music festivals such as the Strasbourg Music Festival. For the first time this year, a Special French Prize worth $5,000 will be awarded at the competition concert on the last day to one of the performers. The recipient will be mentored by Pierlot at his conservatory in Paris for a two-week intensive course, with most expenses covered.

In addition, Pierlot will serve as chief judge for the competition, conduct classes and perform at a solo recital and orchestra concert.

His repertoire, which ranges from Italian baroque virtuoso Vivaldi to French jazz composer Claude Bolling, is described by Mr Goh as "eclectic". Pierlot's set at the recital will include pieces by French composers such as Hector Berlioz and Francis Poulenc.

This is the first time that the 59-year- old master flautist will visit and perform in Singapore. "I've heard that the music scene in Singapore and Asia is thriving, and I'm really excited about coming here," he says.

When: Friday to Monday. Philippe Pierlot will perform on Saturday and Sunday at 8pm. For timings of individual festival dates, go to www.flute.com.sg

Admission: Single concert tickets at $30 each. For tickets, e-mail festival@flute.com.sg or buy at the door