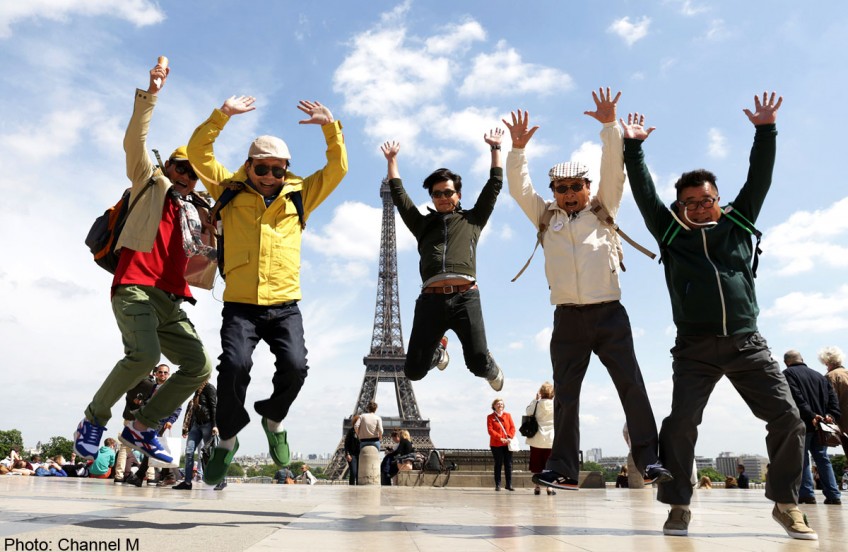 The increase in cable television networks in South Korea has given rise to an array of new personalities, including ones from other countries. Among them is Robin Deiana, a French national with Italian ancestry who has made Korea his second home.

Known among Korean fans by his first name, Deiana is best known as a panelist on the popular JTBC show "Nonsummit," a programme featuring expats living in Korea. The panel discusses Korean issues such as filial piety, education and dating from foreign perspectives.

Deiana's good looks likely boosted his name here, but his rise to stardom in Korea did not follow a direct route, with spontaneous decisions combined with hard work enabling the young man to come to the big city of Seoul from a small town in France.

"I was like, 'Let's just go to Korea,'" the 24-year-old said in an interview with The Korea Herald on Dec. 4, when asked why he had come to Korea.

Deiana initially became interested in Korea during middle school after inadvertently stumbling upon a Korean television clip on YouTube. The young man first came to South Korea several years later in 2010 though, as an exchange student from the Univesite de Bourgogne in France.

He studied at Konkuk University in Korea, before returning to France in the summer of the following year. During this first stay, he even had a Korean girlfriend, whom he says he broke up with in 2012.

Upon his return to France, Deiana was met by a deteriorating economy, which left him with tough choices.

"I had two choices," he said. "Stay in my parents' house and try to find some work, or go to the city."

Deiana said he chose to find work in his hometown, as the rents in Paris and other large French cities were too high.

"If you want to save money, it takes too much time in the city. So I just stayed in my parents' house, and worked, and did a lot of things."

Most of those "things" were menial jobs, he said. He prepared food for local supermarkets. Deiana also did construction work, helping local contractors build solar panels in Burgundy, France. Much of the work was new to the computer science major who had studied programming in college. When asked if he was frustrated with the situation then, he said he was okay.

This was because he was "on a mission," Deiana said, which made the work bearable.

Deiana and his French roommate during his time at Konkuk University had been keeping in touch and sharing plans to return to Korea.

And when they both had saved enough they came back to Korea, with no plans, and no place to stay. One thing was certain to Deiana, however, upon his arrival. He needed to learn Korean, so he returned to Konkuk.

There, one thing led to another, with his Korean language instructor introducing him to an entertainment agency. His television debut in 2013 was with the MBC variety show "Infinite Girls," which is no longer airing.

Later he was cast as one of the panelists on "Nonsummit."

Deiana says he enjoys his life here, including the stares he gets on the streets.

"I like it," he said when asked if he was okay with the hundreds of selfie requests he gets from his fans on the streets. "It's gratifying and (I'm) thankful. I enjoy the autograph requests," he said with a large boyish grin.

Deiana also occasionally enjoys soju, a traditional Korean booze. But not as much as Sung Si-kyung, the famous South Korean singer-songwriter who cohosts "Nonsummit."

"Si-kyung 'hyeong' drinks so much," Deiana said, using the word "hyeong," a term of respect toward a slightly older male. "I have never seen him drunk."

As to his future goals, Deiana says he wants to become a renowned actor.

"I am taking acting lessons right now," he said. "My goal is to move onto a larger stage afterwards."

For now, he plans to work on Christmas Day. And maybe Skype his parents back in France. "I'm not getting too much sleep these days," he said. "I'm going to try to get some sleep."