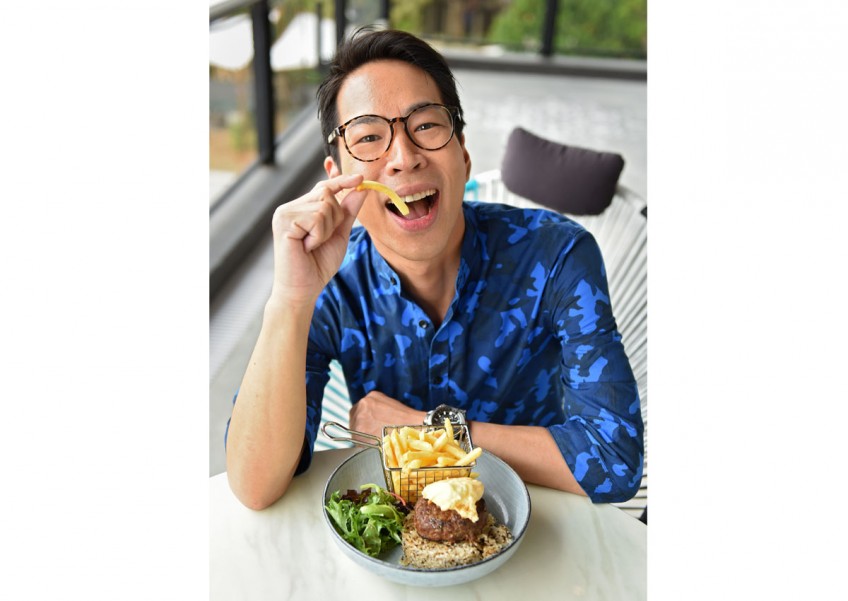 Do not risk the wrath of actor Chua Enlai at a champagne brunch. If you spot him, make sure your plate has only appetisers, mains or desserts on it - not a mish mash of all three.

The 38-year-old bachelor says: "I can't stand it when people put oysters and smoked salmon on the same plate as lamb chops. I go nuts. You can't have macarons and steak, or eclairs and sweet and sour fish on the same plate. You just can't.

"When it comes to champagne brunch, I have to eat in order. So, I start with oysters, then soup and salad, then hot mains and end with dessert."

The Fly Entertainment artist, best known for his roles on news parody television show The Noose, speaks passionately about food and regales The Sunday Times with stories from his travels. He has eaten everything from puffin in Iceland to boiled snails in Marrakesh, Morocco. But he is afraid of snakes.

"I'm scared of the creature, so the closest I came to eating it was dried snake salad in Siem Reap, Cambodia. The snake meat was flaked and tasted like dried cuttlefish."

He also recoils in fright as he recalls dining at a coffee shop in Phnom Penh, where staff were walking around with trays of exotic food, including skewered snake.

Chua, who moved to New Zealand at the age of eight, jokes that his family did so not because his horse trainer dad got a job there, but because there were "no snakes". He spent 12 years there before returning to Singapore to do his national service.

Read also: Food in the 'hood'

A familiar face in the theatre scene, Chua's upcoming project is the stage show The Noose & Kakis: My PSLE Is Better Than Yours, which runs from May 19 to 21 at the MES Theatre at Mediacorp in Ayer Rajah.

While he may be squirmish about eating tarantula, the animated comedian is always game to try something new. Chua, who posts plenty of food pictures on his Instagram account @chuaenlai, says: "I like to try food from different cultures and styles of cooking. You shouldn't judge food if you haven't eaten it. You can't say you don't like something if you haven't tried it."

Tell us about the exotic foods you have eaten overseas.

I was sick of eating tagine in Marrakesh, so I went to the Jemaa el Fna marketplace to try something else. For $1, you get a bowl of snails and eat them with toothpicks. I saw people drinking the soup, so I followed suit. Let's just say that I like the French-style escargot.

I also ate camel kebab in the Sahara desert. It tasted like chicken and was a bit dry. I liked it, although I felt guilty when I went camel-riding the next day.

In Phnom Penh, Cambodia, I ate bugs that were deep-fried. They tasted like potato chips.

In Iceland, I tried fermented shark, which is disgusting. It smells like the strongest cheese and durian put together.

To have steak and a full-bodied red wine from the Mendoza wine region in Buenos Aires, Argentina. I just have a romanticised image of doing this, with a tango performance in the background.

What do you eat when you go back to New Zealand?

I miss Vogel's bread, as well as good fish and chips, meat pie and sausage rolls.

Where do you dine in Singapore?

I love Sichuan cuisine, so I go to LongQing in Hongkong Street for mala hotpot. I go to Chicken Up for Korean fried chicken and The Beast in Jalan Klapa for fried chicken and waffles. I like Ola Beach Club at Sentosa for the view and its tropical and colourful vibe - just like the food, which is colourful and tasty. My favourite two dishes are the Loco Moco (beef patty on top of Japanese rice) and ahi poke bowl.

I started eating chilli and hawker food regularly when I came back to Singapore. I like 328 Katong Laksa in East Coast Road and bak chor mee.

What do you crave?

Potatoes in any form, whether french fries, mashed, fried, baked or the fancier pommes noisette (crisp potato puffs). I can eat potatoes every day, at every meal.

What are your go-to snacks?

My snack choices would be sea salt and vinegar Kettle Chips, muruku, chickpeas, hummus and olives.

What do you eat on the go?

I head to the KFC and McDonald's along Stadium Boulevard because sometimes I want both a cheeseburger and fried chicken - breast meat only.

I like the dry meat. I also like roast pork belly - it's also dry meat and crackling.

What's your choice of tipple?

Like how I eat during a champagne brunch, I also drink in order. So I would start a meal with prosecco or champagne as an aperitif, followed by white wine because of the hot weather.

What are your views on service in Singapore?

I find that there is little respect for the dining experience in Singapore. Customers treat the staff like slaves and staff are also not always invested in the job. When I was in Amalfi, I chatted with service staff who have worked for 30 years and their job is respected. In Malta, I met a "fish chef" who served the salt-baked fish table-side with pride.

If you could pick someone to have a meal with, who would you choose?

American author and television host Anthony Bourdain. You have to respect a food critic who can cook and eats everything. I would love to go on a food tour with him.