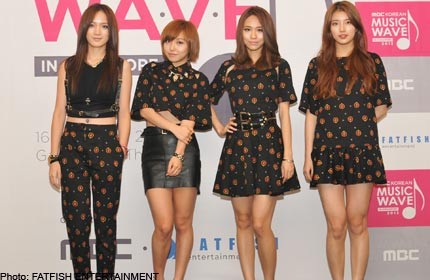 That will buy you VIP access to what's been tipped as the biggest K-pop concert to be held in Singapore.

Come November, 13 of the hottest K-pop groups will make their way to Singapore for the inaugural 2013 MBC Korean Music Wave concert at Gardens by the Bay.

And for that hefty price, K-pop fans can get the opportunity to see their idols rehearse for the new multi-act gig, and they do not have to queue to go into the mosh pit area at the concert venue.

The first 50 fans to buy this VIP package will also get to go to the press conference to be held the day before the show.

A few mystery A-list emcees will also be announced closer to the date of the show, which is on Nov 16 at 7pm.

Jointly organised by one of South Korea's biggest broadcasters, Munhwa Broadcasting Corporation (MBC), and Singapore- based venture group Fatfish Entertainment, the outdoor gig boasts a production budget of $2.5 million and expects to attract a sellout crowd of over 16,000 fans.

In November 2011, the Mnet Asian Music Awards at the Singapore Indoor Stadium saw 10,000 fans in attendance.

Speaking to The New Paper at a press conference at JW Marriott Hotel in Seoul, member Min of popular quintet Miss A said in fluent English: "Gardens By The Bay is one of our favourite places in Singapore, and we are looking forward to coming here with the other great K-pop artistes to perform together on the same stage."

B1A4 member Baro, 20, said in Korean: "It's been a while since B1A4 had been to Singapore, and we feel nervous about meeting our fans again."

Teen Top member Niel, 19, hinted about the boy band's upcoming comeback, saying: "We are going to emerge with a new style soon, and we want to share that with Singaporean fans."

"We are mindful that K-pop fans are younger, which is why we priced the tickets carefully to start from $168."

He said: "This is the first time we have over 70 Korean artistes performing on the same stage in Singapore, so this is a treat for (fans). This is the big one they have been waiting for."