Getting a big 'boo' for your buck 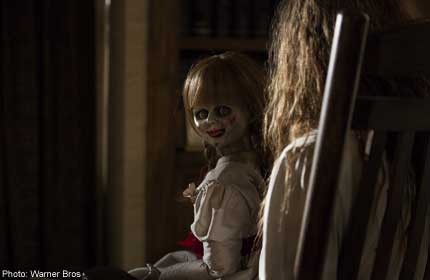 If I were going into the movie biz, I'd make horror flicks.

They're cheap. They're fun. And even the really, really bad ones have the potential to turn a profit.

It's hard NOT to make money from horror.

Gorehounds often prefer the grungy vibe of lower-budget slashers and chillers, which means expenditure can be reduced and profits made bigger.

Saw creator James Wan has absolutely mastered the art of turning blood into money, and he's worked his dark magic yet again with his latest directorial effort The Conjuring.

It tells the story of two paranormal investigators who try to help a young family expel a demonic presence from their country home.

It's no picnic, lemme tell you! We look at some of the cheapbut- good scarers that have slashed above their weight in recent years.

The really crazy thing about The Conjuring is that unlike a lot of horror flicks that make a killing, it's legit awesome.

The story unfolds slowly but very effectively, with real-life ghostbusters and married couple Ed and Lorraine Warren (Patrick Wilson and Vera Farmiga) getting to know the poor Perron family before the witchdemon haunting their home gets serious.

You're never grossed out but you're ALWAYS on the edge of your seat.

The lovely Perron kids act increasingly weird. Their sweet mum gets strangely quiet. It's all disconcerting until it's suddenly BONKERS.

The Conjuring proves that oldtimey ghosts are still present-day terrifying.

One word titles are the best.

Forget The House At The End Of The Street or The Texas Chainsaw Massacre.

Today's audiences don't have time for so many syllables, which explains why all the movies on this list have one-word titles ('the' doesn't count).

People are dumb these days but that's okay!

Mama is the story of a very unfortunate couple - played by the unspeakably fabulous Jessica Chastain and Nikolaj Coster-Waldau - who take in a couple of wild orphans.

The young girls are protected by the spirit of the film's title, and she doesn't mess around, yo!

James Cameron hauled 3-D technology out of the schlock movie ghetto with Avatar.

Then the team behind Piranha 3D dragged it right back.

The two factions even had a little brouhaha about it. In the end, both sides probably had a point.

Piranha 3D made a lot of money.

The story is about prehistoric piranhas eating partying kids, many of whom have large boobs. In 3-D.

The poster for The Unborn was a triumph of both shamelessness and effectiveness.

Odette Annable, the star of the film, looks into a mirror with her back to us.

Her panties are EXTREMELY tight.

After admiring her pert derriere, one might notice the ghost in the mirror, but who cares?

The sale has already been made. While the poster was indeed a masterpiece, the film itself was just pretty good.

Annable plays a young woman who's possessed by a Jewish spirit known as a dybbuk and she walks around in her panties a lot.

Okay I'm going to be completely honest - I was too scared to see this movie.

In my opinion, it deserves to be on this list for this very reason.

When the TRAILER of your movie is too frightening for a large middle-aged man, you know you have a winner.

Ethan Hawke stars as a writer who moves his family into a house where another family was killed.

He wants to write about the murdered family, but as he begins his research he opens a can of worms - dead worms.

There's a pagan spirit that kills kids and stuff and it's all just very nasty.