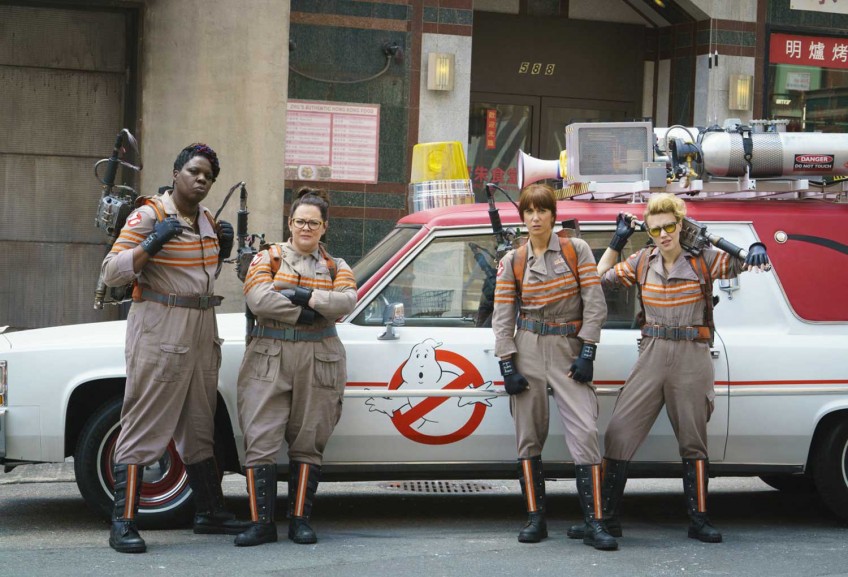 LOS ANGELES - An all-female reboot of "Ghostbusters" hits theatres next month amid a savage backlash by Internet trolls that has thrown the spotlight back onto Hollywood's gender discrimination problem.

The film's first trailer has become the most reviled in YouTube history, having amassed almost 900,000 dislikes, while director Paul Feig and his cast have been bombarded with death threats and misogyny on social media.

"This garbage was made to make Feminazis happy," one Twitter user complained in a broadside typical of the firestorm of abuse.

Feig, who has made his name directing female stars in hits such as "Bridesmaids," was responsible for bringing on board Kate McKinnon, Melissa McCarthy, Leslie Jones and Kristen Wiig for the new version of the 32-year-old all-male original movie.

"I've been hit with some of the worst misogynistic stuff you've ever seen in your life over the last two years," he told a recent producers' conference at Sony Pictures headquarters in southern California.

"The onslaught that came in was just so chilling."

The "Woman and Hollywood" blog noted a similar reaction after the producers of "Star Wars" cast female leads -- in the latest instalment and the upcoming "Rogue One" -- after six consecutive male-led films.

"We are struggling every day to get the word out against that bias. We still get called in the press a 'chick flick' constantly," Feig said.

"We're never referred to without the words 'all-female Ghostbusters,' which makes me crazy," he added.

"You never talk about the 'all-male Expendables.' It's an uphill battle that I can't believe in 2016 we're having to fight."

The backlash against "Ghostbusters" demonstrates how deeply ingrained the idea remains that big-budget, mainstream movies are "the province of males," says Martha Lauzen of San Diego State University's Center for the Study of Women in Television and Film.

"Traditionally, they have featured males and been made by males, with a young male audience in mind," she said.

"Further, the majority of critics reviewing these films have been male," she added. "Making a reboot of one of these films with a mostly female cast violates this group's sense that this public space belongs to them."

Women comprised nine per cent of directors and 11 per cent of writers working on the top 250 domestic grossing films in 2015, according to Lauzen's annual Celluloid Ceiling study.

The knock-on effect is fewer female characters of any depth or interest on screen.

Of 11,306 speaking characters in film and television in 2014 analysed by the University of Southern California's Annenberg School for Communication and Journalism, two-thirds were male overall and almost three-quarters in feature films.

However, the figures suggest the industry is shooting itself in the foot.

Female-led films grossed 3.3 per cent more than movies with male protagonists in 2014, according to Stacey Smith, director of the school's Media, Diversity, and Social Change Initiative.

At just 25, the Australian actress Margot Robbie is carving out a reputation for picking roles that are anything but shrinking violets, from the feisty Naomi Lapaglia in Martin Scorsese's "The Wolf of Wall Street" (2013) to the villainous Harley Quinn in "Suicide Squad," which comes out in August.

"I think people have finally recognised that half the ticket sales are coming from women," she said in an interview about her fiery take on the character of Jane in the upcoming "The Legend of Tarzan."

"And if they don't create the kind of roles that women are going to be able to relate to, then they're not going to enjoy watching them as much."

Anna Rose Holmer's directorial debut "The Fits," which played to acclaim at the Venice and Sundance film festivals, could be described as independent cinema's "Ghostbusters."

Made almost entirely by women and girls behind and in front of the camera, it focuses on an 11-year-old who trains as a boxer with her brother at a Cincinnati community centre while dreaming of becoming a dancer.

Holmer, who wrote the film with Lisa Kjerulff and Saela Davis, feels the gender-bias tide may finally be receding.

"That's the only way it changes, and that requires action," she added.

"It's very simple and it's possible."