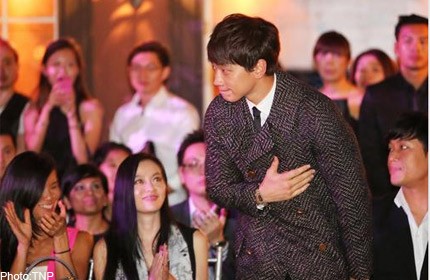 They came all the way from Bangkok, carrying a pair of customised Converse sneakers they hoped to present to their idol, Korean pop superstar Rain. Their efforts paid off.

Not only did Ms Rainna Sucha and Ms Superdog Spinz managed to pass him the gift, they even got to shake his hand and were rewarded with a huge smile from the hunky pop star. Miss Spinz bought the sneakers and painstakingly embellished them with studs by hand. The sneakers cost 5,000 baht (S$200).

"The flight here was definitely worth it," said Ms Sucha, 40, an accountant.

Her good friend, Ms Spinz, 49, a store owner, added jokingly: "Maybe we will not wash our hands tonight."

Rain, 31, was in town for the MCM (Mode Creation Munich) flagship store opening at The Shoppes at Marina Bay Sands on Friday.

The singer's appearance here is part of Fashion Week 2013, presented by The Shoppes at Marina Bay Sands and organised by FIDe Fashion Weeks. It's his first appearance in Singapore since he was discharged from his two-year military service in July, and is also one of his first few public appearances post-enlistment.

Rain's appearance drew over 200 invited guests and media to the store opening. When he arrived on the red carpet at about 6pm, the fans rushed forward. Some had been camping at the Marina Bay Sands Hotel since early in the afternoon.

Surrounded by half a dozen burly bodyguards, Rain, dressed in a black trench coat and black pants, happily shook hands with more than 50 local and overseas fans. Ms Sucha and Ms Spinz, who had waited at the hotel lobby since 1pm, were not the only fans who managed to get up close to Rain.

She got her wish when Rain took the bouquet from her and shook her hands when leaving the store.

She said: "It felt good, it felt like mission accomplished. I really didn't expect him to turn around and shake my hands."

Besides his store appearance, which lasted 20 minutes, Rain also showed up at the MCM runway show, held later that day at The Marina Bay Sands Convention Centre where he was seated at the front row.