Going under for art 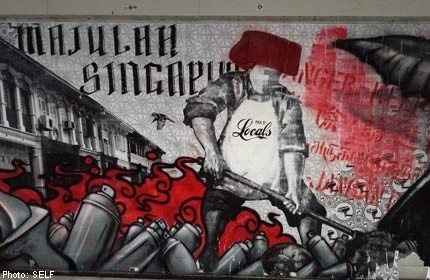 One of the six murals that have been painted in the underpasses along the Singapore River.

SINGAPORE - The Singapore River has long been a source of inspiration to local artists.

While that waterway is not particularly majestic or picturesque, its historical significance can be traced back to the 14th century, when this island was a trading post for ships from Asia.

The river has also been the backdrop as this country made the transition from Third World to First, transforming dramatically in the process.

Once a fetid dumping site and sewer for factories, godowns and slums along its banks, it has since been spruced up.

A massive plan by the Government to clean up the river in 1977 successfully turned it into a leisure attraction.

Eateries and pubs sprung up on the waterfront, a sign of the country's increasing affluence.

While the river mirrored the nation's gumption, its striking metamorphosis also brought an end to the old ways of life.

Artists have therefore painted the river as both a symbol of renewal, as seen in some watercolours by Singapore artist Ong Kim Seng; and an object of nostalgia, such as in artist Lim Tze Peng's Chinese ink paintings.

The tide, though, seems to have turned recently: Businesses in the riverfront quays - Boat Quay, Clarke Quay and Robertson Quay - are looking to art to rejuvenate and revitalise the area.

A private initiative, Singapore River One, comprising tenants, property owners and food and beverages outlets along the Singapore River, was formed last year to oversee the promotion of the river.

Early this year, the organisation launched a project, Underpass Art, which uses culture and design to re-brand the river.

Six murals were installed in January this year in underpasses along the Singapore River near the Pulau Saigon, Clemenceau, Coleman and Elgin bridges. The aim of this art project is to have the works of art become attractions in themselves and woo visitors to the area.

While there have been no reports of a dramatic spike in visitorship to the Singapore River because of the murals, the pieces have certainly made the underground linkways less anonymous and more pleasant to stroll by.

The murals were chosen from an open call and the designs had to be based on the theme of water and history. The pair of murals on both ends of the Elgin Bridge underpass stand out for their harmony.

The mural on the side of The Riverwalk building is by Singapore urban art collective RSCLS (pronounced Rascals).