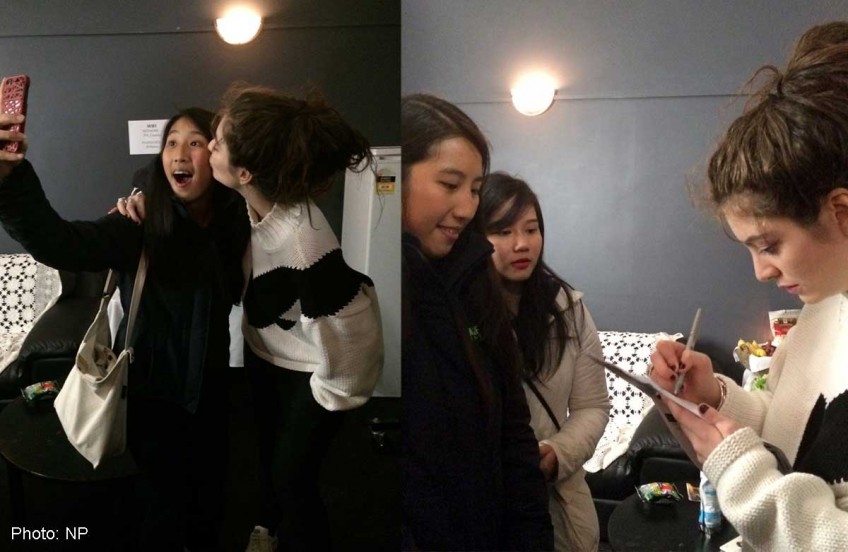 In a short space of time, she is already renowned for her peculiar stage antics, attitude, gloomy dressing and ways beyond her age.

Those three words are every bit the truth - until the 17-year-old steps off stage.

As if by magic, Lorde immediately transforms into Ella Yelich-O'Connor, which is her real name.

After her 90-minute concert at Festival Hall in Melbourne last Wednesday (see report on facing page), I was whisked backstage - along with two lucky contest winners from Singapore, who scored an all-expenses paid trip to see their favourite hitmaker live in Melbourne.

The concert was good, but for winners Nicolette Soh, 23, and Elaine Tan, 19, the real jewel of this prize was the exclusive meet-and-greet.

We were led to a room which was filled with Lorde's family members and crew sitting around large rectangular tables, chatting and laughing.

Among them, I spotted two girls bearing a very faint resemblance to Lorde.

But there was no time to fully survey the room before we were quickly ushered into another space.

The moment had come.

Time to meet Lorde up close.

And that is when the four of us, (Miss Soh brought along her younger sister Tricia, 18) had the first surprise of the evening.

Gone was the all-black on-stage get-up, so was the dark lip rouge and infamous wild mane.

Lorde's face was wiped free of heavy make-up, and she had changed into a comfortable white sweater (with black chevron), pants and platform sneakers.

Her hair looking decidedly less banshee-like pulled into a lazy, messy bun on top of her head.

Further proof she isn't in black 24/7, a clothes rack with regular clothes - some in blue, some red.

And her standard stony glare is not a permanent expression.

Her eyes lit up and she broke into a big smile when she spotted the three fans, pulling them in for bear hugs and voluntary kisses on their cheeks.

Her sullen, slightly-scary on-stage persona was cast to one side in favour of a warm, bubbly personality which allowed fans to feel at ease.

As the girls exchanged pleasantries and chatted, more people, including her mother Sonja Yelich, had come in to see the interaction.

If she was exhausted from her performance earlier, Lorde showed no signs of it.

No stifled yawns, not even a hint of impatience.

You have to respect Lorde. It can't be easy to dance the way she does to her songs.

For 90 minutes, with barely a break for stage banter, she flailed her arms wildly, violently head-banged, jerked in all directions and looked like she was being subjected to barbaric mime about breaking free in the name of artistic expression. It didn't look easy. It looked painful.

All this, while dishing out song after song like Royals, Tennis Court and Still Sane from her 2013 debut Pure Heroine - fully on pitch.

She might have looked freaky pulling strange moves in her all-black outfit, but this was no robotically rehearsed routine - just sincere, energetic and different.

A Lorde show is free of extravagance. Her one concession to outlandish stage costumes was a gold robe she wore to sing Team.

Before she launched into Ribs, she addressed the crowd with a slightly confusing speech: "I threw a house party and it made me realise how it felt to be grown-up. Getting to sing a song about it every night brings me to that moment when I'm 15 and I'm terrified of being an adult. But it's not so bad now that I have you, growing up with me, writing letters with words I would write in my diary, like you read my mind."

The crowd seemed to know what she meant. That moment encapsulated the show overall - strangely moving, but enjoyable at the same time.