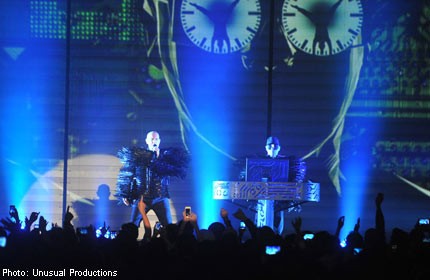 SINGAPORE - A ballroom is an odd place to hold a pop concert but for the 5,000-strong crowd at the Resorts World Convention Centre last Saturday to catch singer Neil Tennant and keyboardist Chris Lowe, what mattered most was that the music was good.

The duo, better known as Pet Shop Boys, certainly did not disappoint.

Their 100-minute show is part of a world tour for their 12th studio record, Electric, released last month, as well as for their previous album Elysium, which was out last year.

Naturally, they started the evening with newer songs such as Axis, A Face Like That and Memory Of The Future.

For the crowd, mostly in their 30s and older who had obviously grown up listening to the Pet Shop Boys, the lyrics may not be as familiar, but the music, those dance beats and Tennant's distinctive nasal twang definitely were.

Tennant, dressed in a black, spiky jacket, then later with a disco ball on his head, and lastly in a neon orange suit, kept audience interaction to a bare minimum. Still, he made a token shout-out towards the end to wish Singapore a happy National Day.

The stage set-up was nothing fancy but even so the show was visually mesmerising. From images such as a circuit board projected onto a screen to the Boys standing behind a white cloth with only their heads showing while projected images of moving bodies formed the lower half to the two accompanying dancers with their boundless energy, there was much to enthral.

Topping all that off, laser beams in white, blue and green would sweep across the audience, creating a disco-like ambience in the ballroom.

Fancy light show aside, it was the Boys' earlier hits that really got everyone dancing and singing along. The show culminated with four early hits - It's A Sin, Domino Dancing, Go West and Always On My Mind - turning it into a dance party, with everyone feeling like teenagers again.

The 1984 hit West End Girls during the encore kept spirits high, before the night ended with Vocal from Electric.

And when the lights came on, it felt like a party that had ended all too soon.