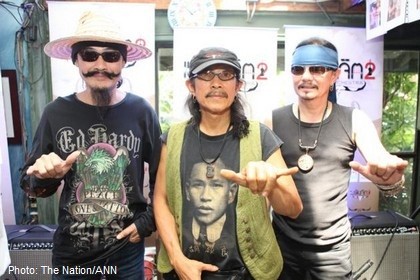 After successfully reviving the most popular songs of the '80s at a packed out concert in March, the "Ploenchit" (merry) series is returning to take fans on a journey down memory lane next month at Impact Exhibition Hall 1, Muang Thong Thani.

This time round, the stars are Thailand's best-known songs-for-life outfit Carabao and they'll be continuing the celebrations of their 30th anniversary by joining up with a 50-piece orchestra for the show."

"Thai people love Carabao, so they are the obvious choice for this sequel," says television host and sometime promoter Nawat Isarakraisin.

"No matter how often the songs-for-lifers put on concerts, the fans flock to see them. Usually they perform either at festivals or in pubs but not everyone is keen on those venues and would welcome an alternative.

"What makes this concert particularly appealing is that Carabao will be playing with an orchestra. The logistics are not easy, as Carabao's members and especially Ad (frontman Yuenyong Ophakhul), have such a tight concert schedule that they have little time for rehearsals. The 50 orchestra members also have other commitments but are meeting regularly thanks to music director Kai Sutee Sangsareechon.

While acknowledging that the show doesn't mark Carabao's debut with a fully fledged orchestra, Nawat maintains that the Ploenchit concert will be very different.

"Firstly, the arrangements of Carabao's songs will be essentially the same but enhanced by the orchestra. The show will also be more entertaining as the guests include pop duo, Byrd & Heart and Siriporn 'Tak' Yooyod who always makes the audience laugh. There'll be pop and international songs in addition to songs-for-life music," he says.

"Byrd & Heart will ensure there's more variety and they'll be working with and Tak Siriporn to ensure the audience is fully entertained.

Despite a generous budget of Bt10 million, Nawat has opted to stage the concert in the 4,500-seat Exhibition Hall rather than the larger Impact Arena.

"Bringing an orchestra to a venue as large as Impact Arena wouldn't work as not everyone in the audience would be able to hear clearly. The importance doesn't lie in the volume but in the clarity and delicacy of music," he explains.

"I'd love to organise a concert featuring the '80s girl trio Sao Sao Sao," says Nawat. "We've been talking about it for a while now and I don't think it's beyond the realm of possibility.

"I've been thinking long and hard about a concert with an international concert too. My choice is the young Filipina Charice but she too has an incredibly tight schedule.

"She's amazing … so young and so proficient."

Apart from the concert, Nawat is also organising the Miss Grand International 2013, being held in Bangkok on November 19 and which will be aired live on Channel 7 and in more than 100 countries worldwide.

"All of the contestants will be in Thailand on November 2 and 3 to take part in charity activities. They'll be visiting Chiang Mai and Pattaya," says Nawat.

- The Ploenchit concert will be held at Impact Exhibition Hall 1, Muang Thong Thani, on September 14 at 2pm and 7pm.

- Tickets cost from Bt1,500 to Bt3,000 at Thai Ticket Major outlets and online at www.ThaiTicketMajor.com.