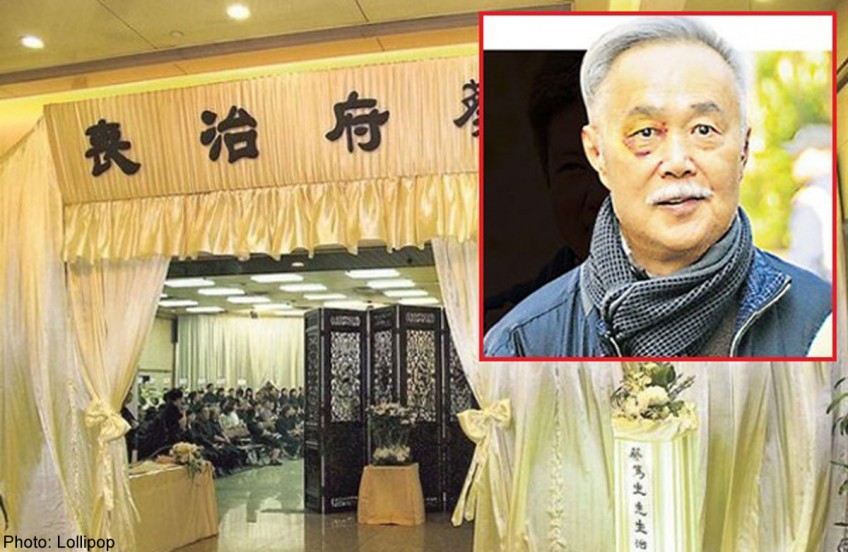 One of the Golden Harvest three giants Choi Wing Cheong, originally named Choi Duk Sun, choked during a meal on June 25 and passed away the next day at the age of 77.

His family began his funeral proceedings on Saturday, Jul 19, at the Universal Funeral Home, the funeral starting at 11am on Sunday with a Buddhist ceremony, reports Hktopten.

Often described as a quiet giant and a low-key person, the family followed Choi Wing Cheong's manner in life and blocked the entrance with screens from outsiders. Choi's hall was decorated simply in white.

Next to the hall words from Coi Wing Cheong's daughter Sum Wai and Ming Wai were hung and monks were chanting.

In the evening, many of the industries' well-klnowns arrived to pay their respect. This included some actors, actresses and many other directors.

Hui Koon Man stayed until around 8:30PM and left. With a face full of sorrow, he said that he and Mr Choi have been friends for several decades. He was the closest among his buddies.

Choi's death is a tremendous loss to the Hong Kong film industry. Hui Koon Man said that Mr Choi had been working in the film industry as early as the start of the Bruce Lee era.

Humble and low key, he was the quietest among the three Golden Harvest giants. Now with his passing he would truly be missed.

Hui also lamented, "We often drank together, but in the recent year or two he has not been well so we saw each other less. He passed away so suddenly!

"However everyone has to go, the most important is to go comfortably.

"He had always wanted to keep on making good movies because he loved movies."