Hair, there and everywhere 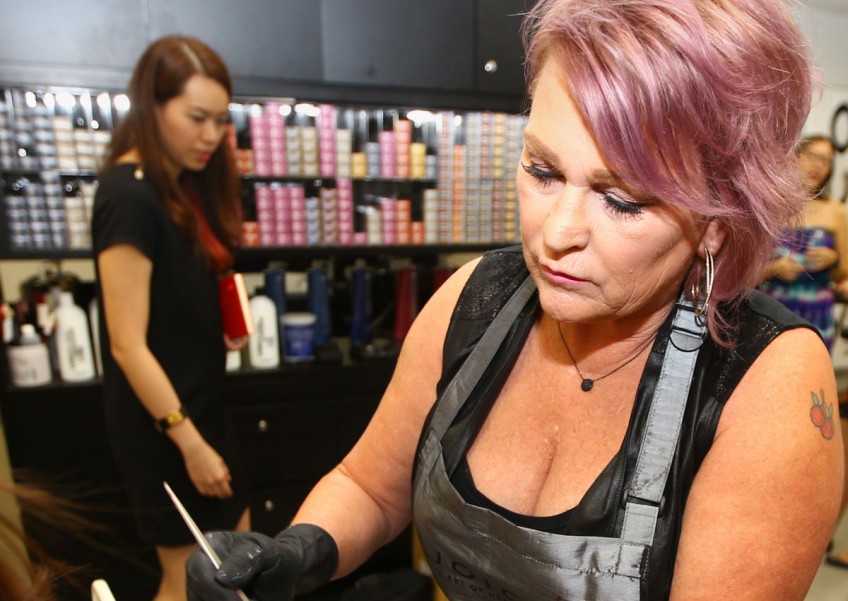 Fans were blown away by Jennifer Lawrence in the 2012 blockbuster The Hunger Games and not just because of her take on protagonist Katniss Everdeen.

It was also the physical transformation the 25-year-old US actress went through to become the heroine.

Lawrence dyed her natural blonde hair to play Katniss, who is a brunette in the book series by author Suzanne Collins.

And the person behind The Hunger Games look is US celebrity hairstylist Cherry Petenbrink.

"When I first met Jennifer, she was nervous about going brunette because she'd bleached and coloured her hair previously, and it was not in good condition," Ms Petenbrink, 53, told The New Paper earlier this month when she visited Singapore as a guest artist of American haircare brand Joico.

"Jennifer was using Joico's K-Pak haircare products to treat her damaged hair. So when I told her we would be using Vero hair colour, which had K-Pak (technology) in it, she wasn't worried any more. We also used a demi-permanent colour, so the colour would fade out naturally after filming wrapped, and she was happy with the results."

Ms Petenbrink started working as a hair colourist for films and TV series in 2008. She is also a hairstylist in Los Angeles.

She landed The Hunger Games gig thanks to a recommendation from her friend, Linda Flowers, hair designer and head stylist for the film.

Ms Petenbrink was on set for several weeks andy worked with the cast, including Josh Hutcherson, Elizabeth Banks and Stanley Tucci.

And is Lawrence as funny and quirky in real life as she appears?

"Oh, absolutely," said Ms Petenbrink. "Jen doesn't take anything seriously at all. Other actresses get really serious with method acting - they just stay in character throughout filming and even answer you in character.

"But Jen is one of those actresses who can be really funny and chatty and suddenly become serious as Katniss when the cameras roll.

"She is really talented and has the ability to 'switch on' her acting mode."

While Ms Petenbrink did not personally design the signature Katniss braid, she said choosing the right colour was important.

"Katniss needed to have natural-looking brunette hair, as she was raised in a poor district with no access to salon services," said Ms Petenbrink. "We had Jen try on several wigs before deciding on the right colour, as it had to look right in different lighting situations."

"Doing The Hunger Games was a fantastic opportunity as I got to play with so many futuristic colours and styles; I could just go crazy with my imagination," said Ms Petenbrink.

"I think (the movie) definitely started a hair colour revolution. Bright colours like blue, purple and green are now seen as high fashion and not just for punks or teenagers."

Unfortunately, Ms Petenbrink was not involved in the subsequent three sequels, including the final instalment, The Hunger Games: Mockingjay - Part 2, which opens here on Nov 19, because the director of the first movie, Gary Ross, was replaced by Francis Lawrence, who helmed the sequels.

"However, as part of the hair team for the first film, the looks we designed set the tone for the rest of the series, so I feel proud of what we've achieved," she said.

She did their hair too

The natural dirty-blonde 30-year-old US actress transformed into a redhead for her role as Avengers heroine Black Widow/Natasha Romanoff.

Ms Petenbrink said: "When I coloured (Scarlett's) hair for Winter Soldier, we wanted a slightly more modern look compared to The Avengers (2012). I used a technique called Flash Effects, where you could see all the bright highlights on the inside when her hair opened up. Her role was very active, so her hair looked great in motion. When she stood still, you could see it was a gorgeous, coppery red.

"I've just finished working with Scarlett again for Civil War. They've changed her look, but it is top secret and I'll get into so much trouble if I say what it is."

Not all celebs go to Ms Petenbrink to look better, as was the case with the 56-year-old British actress.

"Emma was one of those rare cases where our job was to make her hair look less attractive. We gave her a makeunder for her role (Mary Poppins author P.L. Travers)," recalled Ms Petenbrink.

"She naturally had gorgeous blonde hair and we had to give her a matte brown colour with really tight, short curls. It aged her by about 15 years.

"Emma said when her husband saw it, he said, 'Oh my gosh, no more fooling around for the next few months.' And she told me, 'Thanks a lot, Cherry!'

"But she said her hair helped her get into character and feel frumpy and unhappy."

Ms Petenbrink coloured Kaling's hair as a private client because the 36-year-old US actress wanted a change from her "dark Asian hair".

"I gave Mindy some lighter tones towards the ends of her hair to give her Rihanna's look. She loved it and said she had never got so much attention for her hair before. I touched it up for her recently before the Emmys (last month)."