Billie Eilish took the music world by storm, and she is now reinventing what it means to be a pop star. Having gotten her start merely through Soundcloud at 14, her distinct music obviously stood out-along with her distinct style.

Hey, we have nothing against sparkly dresses or "revealing" outfits, but we do appreciate how Billie shows the world that pop stars can thrive in baggy shirts too; that they shouldn't simply be boxed into a certain image.

Personally, I find it empowering, especially since most of my life, that was how I dressed (thanks largely to my five brothers). But in her latest ad with Calvin Klein, she reveals it's more than just about aesthetics. As she shares the true reason behind her fashion choices, I couldn't help but agree with one netizen who said, "[It] feels really empowering & incredibly sad all at once."

In the brand's "I Speak My Truth In #MyCalvins" ad campaign, the 17-year-old admitted, "I never want the world to know everything about me. I mean that's why I wear big baggy clothes: nobody can have an opinion because they haven't seen what's underneath, you know?" She continued, "Nobody can be like, 'she's slim-thick, she's not slim-thick, she's got a flat a**, she got a fat a**.' Nobody can say any of that because they don't know."

While many fans applaud her and the movement for this, they can't help but comment on the real tragedy here.

Of course, it's one thing to say that she feels most herself in these clothes, or that she prefers them because they're comfortable-but to say that she chooses them because she's essentially afraid to be sexualized or body-shamed, is a whole other thing. It's worth noting that Billie didn't always wear baggy clothing. She actually used to wear crop tops and skinny jeans.

This led to some fans speculating that along the way, people were already sexualizing or body-shaming her as early as 15.

Regardless if this is true or not, Billie's confession in the video clearly signifies the very real impact of a society where people assign way too much attention to women's-even girls'-bodies than they should. What's even more sad is, we know for sure Billie's insecurity didn't just develop in her teenage years.

when billie eilish said “i wear baggy clothes so ppl don’t have to know what’s underneath, they can’t judge” i felt that

I will ALWAYS stan Billie and this breaks my heart that she feels the need to dress like this just to avoid you miserable people who like to body shame for NO REASON https://t.co/xn0IqmEVzm

In an interview with Fader just this March, Billie told the magazine that she thinks "As soon as you turn nine, it's TRASH. Nine and up is garbage. For me, it was literally nine and then just bad, badbadbad, worse, horrible…" She then explains what it is about that age she particularly finds upsetting: "Suddenly you hate things about yourself. Before I was nine I wasn't thinking like, ugh, I'm too fat, are my eyebrows weird? Of course not: I was running around naked and barefoot and tripping and coming up with grass stains on my legs…" 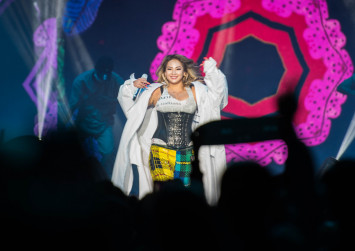 If you think nine is way too young for girls to be concerned about their bodies, you'll be shocked to know that some are even younger than that when they faced body image issues.

According to a 2015 report by Common Sense, more than half of girls (and approximately one-third of boys) aged six to eight "indicate their ideal body weight is thinner than their current weight." The other findings also include: "by age six, children are aware of dieting and may have tried it; 26 per cent of five-year-olds recommend dieting as a solution for a person who has gained weight; and by the time kids reach age seven, one in four has engaged in some kind of dieting behaviour."

Furthermore, it reported that "between 1999 and 2006, hospitalizations for eating disorders among children below the age of 12 spiked 112 per cent."

While there are many possible causes of harmful body-image, Common Sense cited media as one of the major sources. "Young children engage with some of the more extreme body portrayals in media in the form of dolls and action figures.

And female characters in family films, on prime-time TV, and on kids' TV shows are nearly twice as likely to have an uncharacteristically small waist as their male counterparts," they wrote.

These data and what Billie revealed regarding her fashion choices should be enough to alarm us. We're not saying Billie's style is wrong or invalid-I still maintain that the way she owns it is empowering-but certainly the deep, underlying reasons for the way she dresses deserve to be dissected with a critical eye.